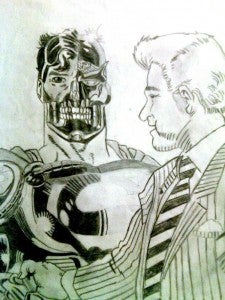 The Presidency of the United States of America is a job that comes with a lot of perks, one of the most obvious being that pretty much everyone takes you seriously. But, like court jesters in days of old, the entertainment community takes a certain license to have fun with the President, and every so often the Commander-in-Chief ends up looking a little foolish, or evil, or both. Comics are no exception, certainly, with larger-than-life morality plays and global consequences at their core. So what are some of the more memorable times when the President was given...well, less than unconditional respect...in modern superhero comics?

Richard Nixon is the Villain in Captain America In the midst of the Watergate scandal, most comics weren't addressing what was going on in the real world. Captain America wasn't much different, although they have ended up as a footnote in the history of that period by dealing more indirectly with President Nixon's corruption: a hooded mastermind, pulling the strings behind a massive plot for a supervillain group called The Secret Empire, was strongly implied to be Nixon. Ironically enough, one aspect of the Secret Empire's plot was to consolidate power by faking an alien invasion--a similar ruse was used to create artificial world peace during the Nixon administration in Alan Moore and Dave Gibbons's Watchmen. Bill Clinton Endorses the Cyborg Superman This election, there's been a lot of discussion of polling models and how bad media outlets will look if they predict the election's outcome only to turn out wrong. Well, back in the early '90s, then-new President Bill Clinton was appearing in more comics than a normal President (this tends to happen at the beginning of the term) and he made a rather startlingly inaccurate prediction himself, accepting Hank Henshaw, also known as the Cyborg Superman, as the "real deal" and granting the villain a photo op and the U.S. Government's stamp of approval after Henshaw saved Clinton from a terrorist assassination attempt. Shortly thereafter, of course, Henshaw would turn out to be a homicidal maniac who killed 7 million Americans in a terrorist attack that was impressive even by DC Universe standards. 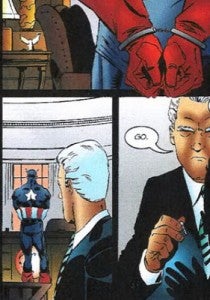 During the "Man Without a Country" storyline by Mark Waid and Ron Garney, Captain Americawore one of the handful of not-Captain-America-but-still-superheroing costumes that he's used during the course of his career. This time, it was a result of President Clinton, who exiled Cap from U.S. soil and stripped him of his name and title after the hero was framed for an attack on a U.S. military base and Clinton fell for it. This seemed to be a pretty common perception of Clinton in comics--that he'd fall for anything where supervillains were involved! George W. Bush Threatened by the Punisher If you're a dangerously-unhinged vigilante who finds himself pursued by a gaggle of elite forces answering to the President alone, what do you do? Well, in many cases the answer would probably by to kill the President, but you can't really show that in comics. Especially in Marvel Comics, where they don't have fictional cities and often don't have fictional public officials. Killing a sitting President in your fiction would not only put your name on a watch list somewhere, but would also ring false with readers who would then have to go through the rest of that person's term with the knowledge that there was a widening gap between the real world and the world of the storytelling--and that the gap could be traced back to this one moment. Breaking into his office and offering some not-so-subtle threats to the drunk and nearly-incoherent man-boy President? That's more Frank Castle's speed. Far be it from a good ol' soldier like Frank to do anything really nasty to the commander-in-chief. 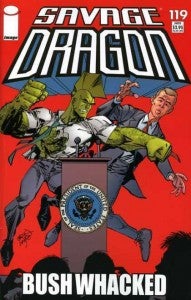 George W. Bush KO'ed by Savage Dragon (kind of) It's pretty common knowledge that, shortly before his apparent death, Savage Dragon built a pretty good relationship with Barack Obama. He'd endorsed Obama for President and then was asked by the President-elect to step up and help keep Chicago safe after the election was over. But what of Obama's immediate predecessor? Well, the whole reason that Dragon was in a position to be giving endorsements is that he ran for President in 2004 against George W. Bush and John Kerry. The run was actually organized by a corrupt politician looking to wreak havoc, but that didn't stop Dragon from taking a swing at Imposter, a supervillain who had taken Bush's place, during a public event. The Superman image above is fan art taken from Mothsonian at DeviantArt, based on an image by Dan Jurgens. All the rest are from the comics in question.