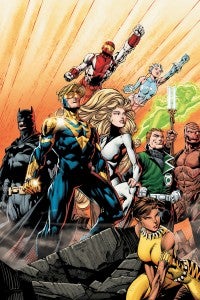 So, now that all of DC's August solicitations are out, we can see that it's only Justice League International which will end with its twelfth issue. Given previous statements by DC brass that they'd like to keep 52 monthly titles alive as a thing, and that their current model makes more sense canceling old book and announcing new ones in batches like they did back in January. That, combined with the vague solicitation text for Justice League International Annual #1, which promotes the book as final adventure featuring "this iteration" of the Justice League International, has led a lot of fans to speculate that maybe the series isn't really going away, but being reinvented somewhat. Why this couldn't happen with just a simple creative team change or roster update is anyone's guess, but we have some ideas for what could make sense as a replacement for Justice League International's place in the lineup: Justice League International: Season 2 With Geoff Johns and Dan DiDio taking over the writing chores on the annual from Dan Jurgens, it's hard to imagine that, should the title continue in some form, one or both of them won't be involved. With Johns involved, perhaps it's wiser to call it "Rebirth" than "Season 2," but the "Season 2" tag would give them more flexibility to extend the policy to other titles later. One of the things that had been proposed--maybe half-seriously--at some point early in the relaunch was that these books could function more like TV series, where a creative team could tell one big, sweeping story more like a long-form original graphic novel (or, if you prefer, like Watchmen) and then leave the book without anyone feeling like they were "fired" or left their readers in a lurch. Based more on the TV model, this could play better in the bookstore market and even digitally, but would likely be a harder sell among hardcore fans, who enjoy the interconnectedness and soap operatic nature of comics as they exist today. Of all the options, this seems the most likely, as it would allow DC to retain the "Justice League" tag on the cover, keeping the book firmly entrenched within the franchise. Freedom Fighters With The Ray and Phantom Lady getting their own high-profile miniseries, would it really be that surprising to see a Freedom Fighters monthly get a shot in the New 52?  They've also got history as a government-sponsored superteam at times and could slip into the JLI role pretty easily, but without the baggage of the UN. This would also play nicely with the Phantom Lady mini starting at the same time as the Justice League International annual, which ends the series. If you could merge the pair of lineups, then it would work even better. What better way to make people love Godiva than to have her drawn on the cover by Amanda Conner? Yum. Global Guardians Probably the most likely take on the series outside of just going with "season two," the Global Guardians were the original DC team that featured international heroes and ultimately got folded into the Justice League International (after initially having a little problem with the way they came around and hogged the spotlight). Reintroducing that concept in the world of the New 52 with a high-profile creative team attached might be a nice way to increase the value of some of their dormant properties, but it's also a little dicey right now given that Image is launching a Guardians of the Globe series soon. Maybe use characters and concepts from the Global Guardians but retain the Justice League name for marketing reasons? Justice Society International Tying into Earth 2, perhaps Justice League International could be rebranded as a way to keep some of the Golden Age characters active and vital in our world. Like Worlds' Finest, perhaps a number of characters could be stranded here and, rather than returning to their war-ravaged world (which is difficult and possibly not even an option) they could take up the reins of the JLI here. Justice League International: You Got a Problem With That? Toss the whole thing out the window and have Keith Giffen and J.M. DeMatteis write a JLI book that's set more firmly in what's colloquially referred to as the "Giffenverse," the world where Giffen & DeMatteis' fan-favorite Justice League series can exist outside of the constraints of the continuity that tends to make them apocryphal and the interconnected universe that turns their humorous take on the characters into something that makes them (notably Booster Gold and Blue Beetle) objects of derision in the superhero community.