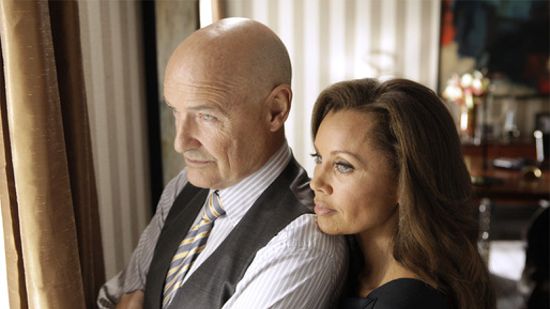 Terry O’Quinn made a name for himself among comic book fans with his roles as F.B.I. Assistant Director Kendall on Alias and as John Locke on LOST. He’s also been a recent addition to the sci-fi drama Falling Skies on TNT, playing the role of Arthur Manchester. Now, he’s playing a major role as Gavin Doran on ABC’s new horror drama 666 Park Avenue.

Here’s the description for the premiere episode of 666 Park Avenue. “When Jane Van Veen (Rachael Taylor) and Henry Martin (Dave Annable), an idealistic young couple from the Midwest, arrive in New York City, the glamorous center of industry and media, they are offered the opportunity to manage the historic Drake by its wealthy owners, Gavin (Terry O'Quinn) and Olivia Duran (Vanessa Williams) - and the seduction begins. Jane, a small town girl with big ambitions, always knew she wanted to be an architect. Henry, a member of the Mayor's staff, is grounded, intelligent and tenacious. They are lured by the intoxicating lifestyle of New York's wealthy elite. But they soon wonder what they've gotten themselves into when they unwittingly bump into the dark embrace of the building's mysterious supernatural forces which endanger the lives of their residents.

Gavin, who has many skeletons in his own closet, is at the height of his world and commands the dark power of The Drake. Olivia, his beautiful but enigmatic, supportive wife, wears her elegance, wealth and position in society like armor... but cracks will slowly be revealed.

Jane and Henry are not the only ones to fall prey to the machinations of Gavin and Olivia. There are other residents, including Brian Leonard (Robert Buckley), a young playwright pining for his early success and promise. Brian's wife, Louise (Mercedes Masšhn), is a rising hot star in the world of fashion photography. Alexis Blume (Helena Mattsson) is a troubled young woman who is the picture of obsession -- what is her real connection to Gavin, and what part will she play in Brian and Louise's life? Tony DeMeo (Erik Palladino), The Drake's doorman, is the eyes and ears of the building. And then there is 14-year-old Nona Clark (Samantha Logan), who has a blossoming psychic ability, allowing her to look into the future of her fellow Drake occupants.”

666 Park Avenue premieres on Sunday, September 30 from 10:01 PM to 11:00 PM ET on ABC. If you can’t wait for the premiere, here’s a sneak peek of the first nine minutes and forty one seconds of the pilot episode.