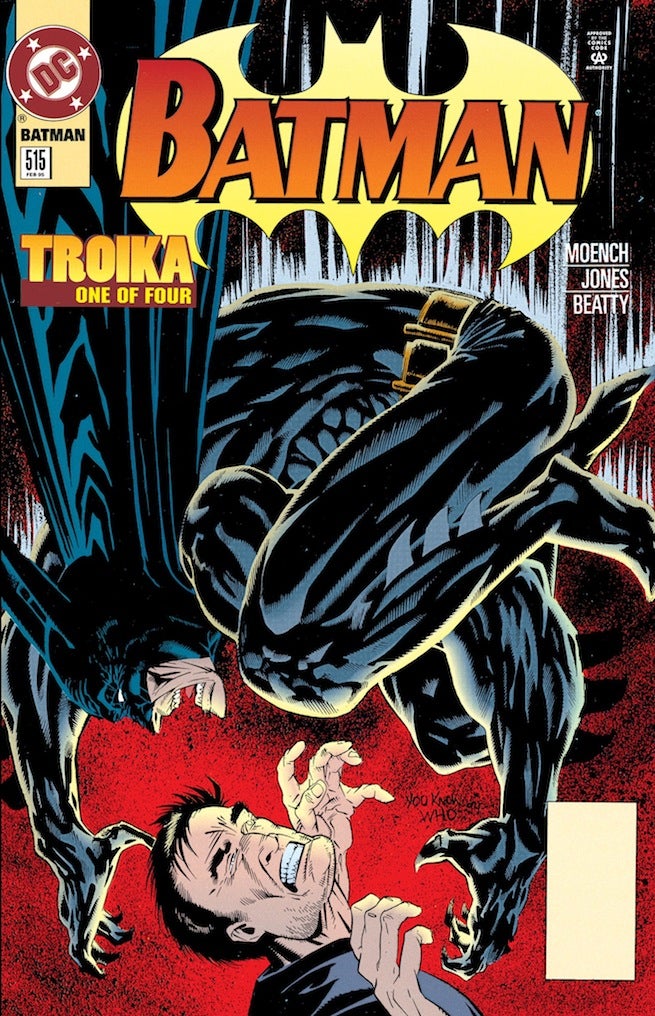 Coming on the heels of the two-plus year-long "Knightfall" storyline, which put Bruce Wayne on the shelf as the Caped Crusader and replaced him with the mentally unstable Jean-Paul Valley, 1995’s four-part "Batman: Troika" deals with more of the aftermath of the "true" Batman’s prolonged absence. The story, as told in Batman #515, Batman: Shadow of the Bat #35, Detective Comics #682 and Robin #14, revolves around a plot from villains Colonel Vega, KGBeast and Dark Rider to nuke Gotham with an explosive that looks like a baseball. The storyline is also notable for introducing Batman's new Kevlar costume and a tricked out Batmobile. And because this is the 90s, the first part of this storyline features a black embossed cover that’s designed to mimic the Dark Knight’s new Kevlar attire.

So let’s run down the good, the bad and the in-between from "Troika" and make a determination if this storyline is 90s nirvana, or not worth your time. 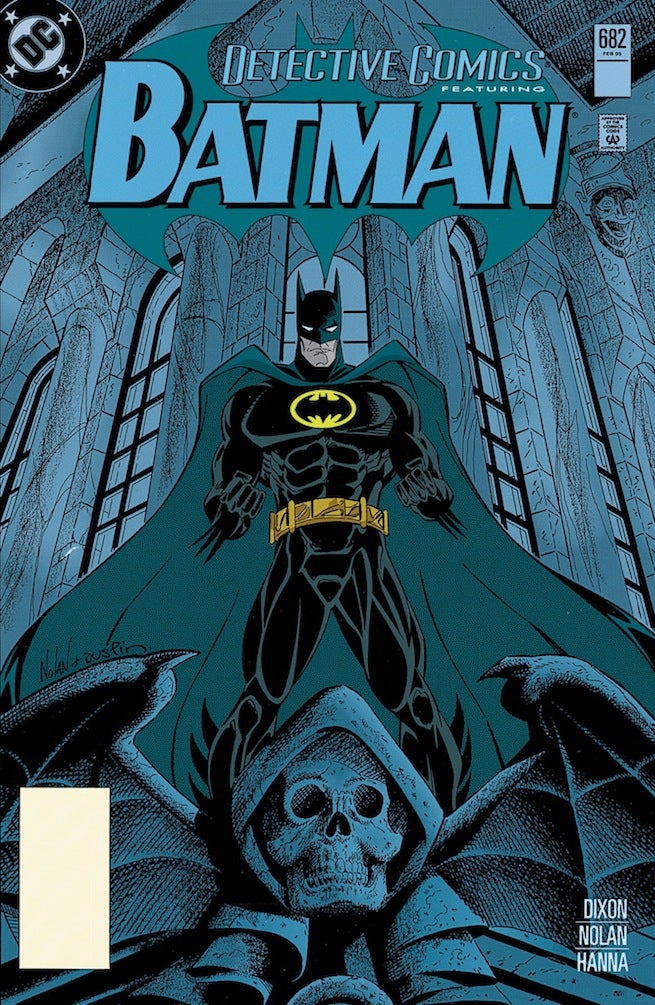 "Troika" is essentially the first full story arc that places Bruce Wayne back in the cape and cowl  after Azrael’s (also known as AzBat) reign of terror on Gotham, which in typical 90s fashion depicted a darker, more violent superhero story (though to be fair, the AzBat era was put forward by DC in large part to demonstrate how Jean-Paul Valley’s sadistic tactics as Batman made him very un-heroic). And while Bruce promises Robin and Nightwing that some things would be new and improved (like his costume and Batmobile), the character’s dark sense of humor and obsessive desire to protect Gotham are back, giving the Bat-books a sense of comfort and stability that was sorely lacking for a while. 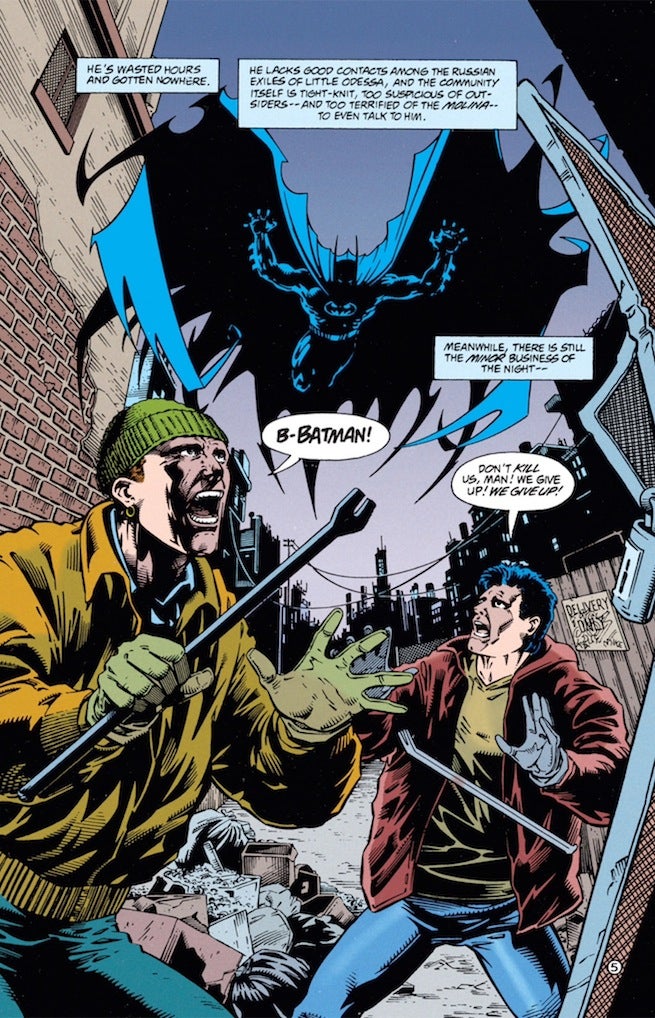 2. Acknowledging the Damage of Azrael

Not only is Bruce back as Batman in this story, but there’s a great moment in Shadow of the Bat #35 that shows just how badly the AzBat-era tarnished the Caped Crusader’s reputation – even among its criminal element. In a classic pose from artists Barry Kitson and Ray McCarthy, Batman swoops in on a couple of crooks in an alley, his cape outstretched like the wings of a bat. The crooks react with total terror at the sight of Batman, worried that he might kill them. Considering how the modern iteration of Batman would never kill, Bruce immediately thinks to himself that these thugs must think it’s his predecessor, Jean-Paul descending upon them. The creative team doesn’t linger too long in this moment, but it’s still a nice nod and acknowledgement as to just how upside down the Bat-books had been the past year and change.

After being rendered all but useless by Azrael during "Knightfall," Robin III (aka, Tim Drake) eventually went solo rather than continue to serve as a punching bag for his mentally unstable partner. However, that old Batman and Robin dynamic is restored with Bruce’s return as the Caped Crusader, with Boy Wonder getting a chance to really shine on his own in "Troika’s" final chapter.

While Batman is elsewhere battling Gotham’s would-be nuclear terrorists, Robin is left to face KGBeast, who is just biding his time for the Dark Knight to show up so he can blow up the city. The following sequence is a well-executed David vs. Goliath battle that shows Robin getting physically outclassed by his opponent but still hanging in there with the fate of Gotham at stake. And when Tim gets an opening to possibly shoot KGBeast and kill him without any honor, he resists and continues to play “by the rules.”

After months watching Azrael add guns and shurikens and any other weapon one can imagine to his Batman suit, "Troika" was the prefect time to roll back the status quo and practice some restraint in the Bat-books. Instead, the creative team seemed to double down by using the first full splash page of Batman #515 to show Bruce in his new Batman costume – which elicited some curious looks from Robin and Nightwing within the story. It’s unfair to say that every storyline from the 90s promoted excess, but it’s decisions like this one that perpetuate that gross generalization. Less can certainly be more, and less was absolutely needed to celebrate Batman’s return, not Kevlar and super-pointy ears. 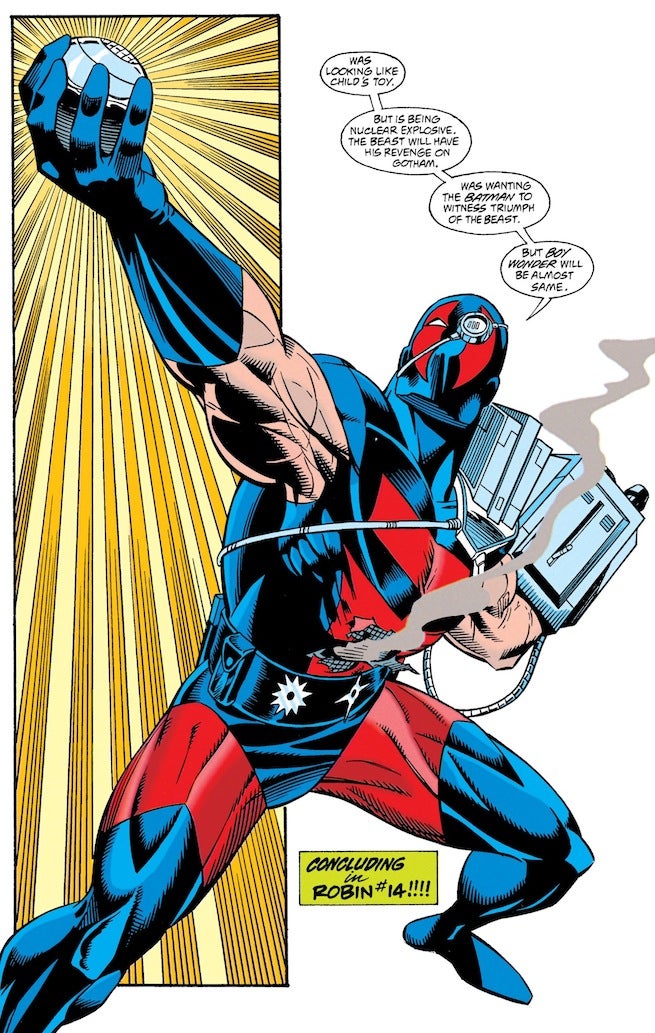 In the same vein as restoring the classic costume, it would have been nice to throw a classic villain at Bruce in his return to the cape and cowl. Instead, "Troika" features a triumvirate of Soviet Russia stereotypes that talk in heavy accents and clichés (in Soviet Russia, clichés talk like you). Plus, if you strip away some of its bells and whistles, "Troika" is basically just another "Batman has to find the bomb" storyline. Beyond the Robin/KGBeast fight, there’s very little drama or doubt as to what the outcome will be, because we’ve seen Batman do this so many times before.

Whether it’s Amazing Spider-Man #400, Fantastic Four #371 or Batman #515, one-color embossed covers just don’t look good. The cover’s artwork/illustration loses all definition within the monochromatic scheme and the embossing resembles a series of indescribable bumps and lines. While the gimmick cover has made its comeback in recent years, thankfully the monochromatic embossed cover hasn't reared its ugly head. 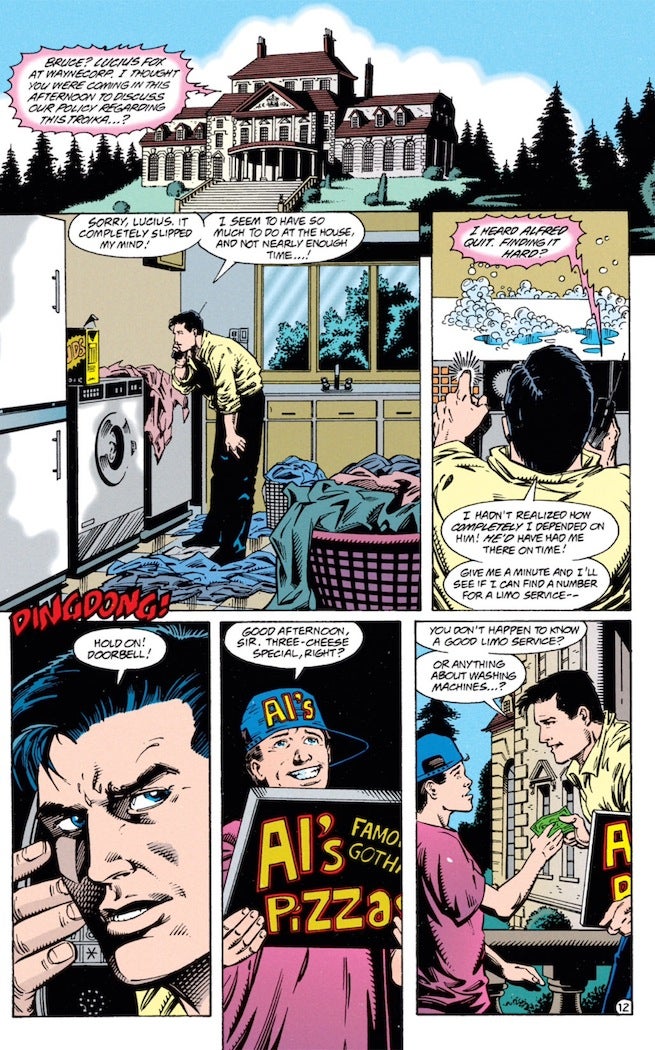 It’s a shame that Alfred Pennyworth resigned from his post at Wayne Manor, but if the net result is watching Bruce struggle to do his own laundry, I’m all for it. Also, pizza delivery is such a great rich man's move. Though if memory serves, one of the last times Bruce answered the door to his home, Bane was there to break his back. Watch out for the pizza guy Bruce!

While Bruce doing laundry might be funny, something the world doesn’t need more of is Commissioner Gordon underwear shots. At least he wasn’t put in tightie whiteties. But seriously, Jim Gordon is no Calvin Klein model.

Despite some of its gimmicks, new costumes, vehicles and fancy covers, "Batman: Troika" is a fun but unmemorable storyline that, based on where it falls in Bat-history, could have been much, much more. Better things were to come for the Bat-books in the year or two that followed, but "Troika" is the epitome of average.