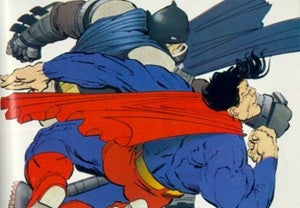 “What would fan reaction be to a Justice League movie with Frank Miller’s name attached?”

That's a question posed to a comic book retailer by customers who entered the store, began grilling employees about comics and film, and ultimately managed to convince the guys behind the counter (mostly by never saying it themselves) that they were secretly Warner Brothers market research representatives, posing as fans in an effort to get a street-level view of the comics business.

According to the retailers, the many questions they were peppered with by these strange and suspect individuals included:

While the shadowy figures reportedly focused heavily on DC, they also pointed some derisive comments at Marvel's planned Ant-Man translation, before being instructed by the employees that, in fact, Ant-Man had some promise, particularly as Marvel has successfully crafted an interconnected cinematic universe where every movie is "important" because every movie plays into the bigger picture.

This is all sourced from an anonymous comic book retailer, who fed the information to news and gossip site Bleeding Cool but who didn't appear to have written it themself, meaning that it's anonymous information that's being translated by a third party who wasn't present, so it is of course entirely possible the whole thing will never amount to anything (and even if true, Warners would likely never admit to such a thing).

According to Bleeding Cool, "They knew nothing about comics but corrected a member of staff on the year the Justice League film was due, 2014, not 2013." That, of course, doesn't even jive with rumors; 2014 would be a ludicrously optimistic target for Justice League, and most rumors have had the film opening in 2015, going head-to-head with Joss Whedon's second Avengers film. It's possible, one supposes, that Warner could have the idea in their head that they don't want any piece of that competition and that earlier is better than later simply to avoid spending $200 million on a movie that comes while the viewing public is in the throes of this "superhero fatigue" that the film community seems to have convinced themselves is coming any minute now--but it's an odd remark in any case, and not particularly in keeping with the impression the retailers got that these guys may be working directly for Warners.

Arguably the most harrowing aspect of the whole story is one that seems to suggest that, if these people really are Warner Brothers operatives, the film side of DC Entertainment is living in a protective bubble that ought really to be shattered if they want to make successful films.

"The biggest give away for the staff was when they asked what impact films had on comics sales," says the article. "The staff replied that it was very little, unless it was an unknown character. Their immediate response was 'Oh, like Jonah Hex' which didn’t fit with the rest of their limited knowledge – and they didn’t seem aware that the Green Lantern and Jonah Hex movies were not well regarded.

Let's go over that again: They didn't seem aware that Jonah Hex (which was a financial and critical disaster for the studio) and Green Lantern (a film so universally mocked that it's part of a Saturday Night Live monologue more than a year later) were not universally beloved.

Jonah Hex's worldwide theatrical gross was less than $11 million, while it cost $47 million to make, according to Box Office Mojo. The film's Rotten Tomatoes score is a dismal 13%. Green Lantern fared marginally better, making $219 million worldwide on a reported $200 million budget and scoring 26% on Rotten Tomatoes.

Assuming the whole thing isn't an elaborate hoax in the hopes of getting Internet-famous, it may be more likely that the individuals in question are working with Nielsen, the ratings organization with whom DC has been working since the launch of the New 52.

If the retailer is right, though, and these are (however indirectly) agents of Warner Brothers, the Frank Miller question is an interesting one. While his Lionsgate film adaptation of The Spirit was an unmitigated failure (and Warners should know, as they handled the home video release), both Sin City and 300 were massive hits in their time, with sequels on the way, and the 300 franchise rests with Warner Brothers. DC Entertainment, of course, stands to gain more than most if Miller's stock were to go up, since much of his best-known work was done for them and remains in print.

What would you think of a Frank Miller Justice League film? Could the angry, cynical Miller make such a film work without alienating the audience or betraying the core of the concept? Message board reaction around a handful of comics sites that picked up the story has been mixed so far.

The unwelcome advice offered to these mystery men by comic shop employees: Warners should just do as Marvel has done.

A Justice League Movie With Frank Miller? Maybe So.

Xbox Game Pass Surprises Subscribers With Another Day One Release

Toonami Takes Over TikTok With a Glorious New Trend

Fear the Walking Dead Not Ending at Season 7