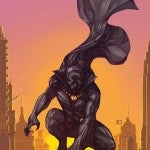 Anthony Mackie, who plays Will Johnson in this weekend's release Abraham Lincoln: Vampire Hunter, told HitFix during a recent interview that he wanted to play Black Panther if the rumored Marvel Comics adaptation ever happens.

"I love Black Panther and I love the story behind it. It would be cool to be a part of it," the actor is quoted as saying at MTV's Splash Page blog.  "If Black Panther is made into a movie, I would love for it to be along the lines of Batman. It has to be an adult action hero. I would love to be a part of it, though, and I would sign on to it today."

The actor, who is better known for his role in The Hurt Locker, might have a shot, but only if Marvel makes the rumors about the movie's existence official. When will we find out about that? Probably at next month's Comic-Con International in San Diego.