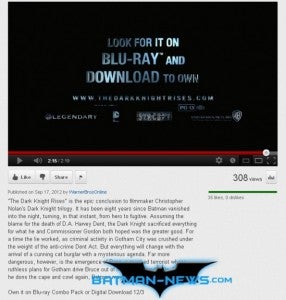 Earlier today, Warner Brothers seemed to confirm that The Dark Knight Rises, the final installment of Christopher Nolan's fan-favorite Batman trilogy, would be heading to home video on December 3.

They suggested this, according to Batman-News, in one of the most obvious ways that you can suggest such a thing: by putting it on an official website.

A new trailer for the Blu-ray, which appeared earlier today on Warner Brothers' YouTube channel, featured a description that included a December 3, 2012 release date--but it wasn't long before the YouTube description was edited and the release date removed, prompting fans to wonder what happened and whether the move suggests an actual change to the release date or merely that Warners isn't ready to announce it formally yet.

In any event, the change was made after Batman-News had already seen it and thought ahead to grab a screen capture, thus confirming that they weren't crazy the first time around.

You can check out the video below, and we'll be sure to bring you the release date as soon as it's official.