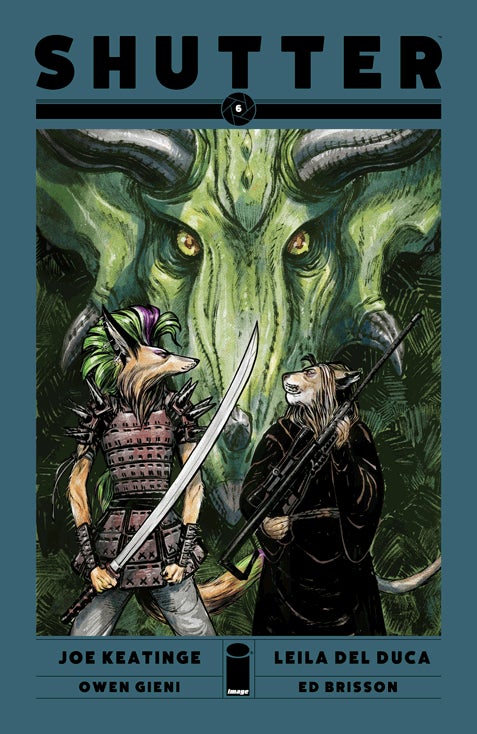 Any comic that contains a line like "Is that a triceratops?!" is pretty much right up my alley. I love imaginative comics because they reflect things that can only be accomplished in the comics medium. Nowhere else can you make any idea, no matter how big, impossible, or outright crazy come alive like you can in comics. There are no big budgetary requirements. All you need to get started is a few quarters for some paper and a pencil.

Joe Keatinge and Leila del Duca understand that there are no inherent limits on imagination in comics and have embraced that principle in Shutter. Together they have crafted one of the strangest and most exciting comic debuts of 2014. That comes across in not only the main story, but the wonderful backup comics included in every issue (like the ever-awesome Tiger Lawyer). The first collection of Shutter draws to a close in Shutter #6 on Wednesday, but this issue feels like the beginning of something larger and grander than what has come so far.

Every issue of Shutter has not just included, but reveled in a world that is fascinatingly odd. It's difficult to pinpoint all of the differences between the settings occupied by the main character Kate and our own version of Earth. Although there are big battles with cat gangsters and ninja ghosts that are obviously strange, there are small details like a plant person working in a record store that simply exist in the background. It is a consistently interesting world, where every panel is capable of revealing some new facet.

That broad sense of creation defies the typical elevator pitches many comics receive where they can be summed up as "this TV show meets this other comic". It is truly its own thing and that is present in both the big and small moments of the series. Shutter #6 brings examples of both, with some understated character beats and the most vicious confrontation in the series yet.

The aforementioned confrontation reflects Keatinge and del Duca's approach to violence. Unlike the standard portrayal of fantastical conflicts found in superhero fare, they approach violence in a surprisingly realistic manner. The sequences are still thrilling, but the consequences are much more grounded. Gunshots and punches land with effect and are made to feel painful. Characters die and, even when those characters were stone cold killers, it's never treated as a triumph. Del Duca understands that death and pain are not joyful experiences and treats them with appropriate gravitas.

Much of the impact in the battle and throughout the book comes through in del Duca's facial expressions. Her characters' faces are always clear in what they think and feel. Everything comes through, surprise, anger, joy, sadness, even in more subtle interactions. Keatinge recognizes his collaborator's great skill with crafting emotion and uses it to the benefit of his scripts. Kate rarely talks about how she is feeling, but readers are always aware. There's no unnecessary repetition of information to be found. This has allowed Kate to be portrayed someone reluctant to share her feelings, without leaving readers confused.

Del Duca's clear conveyance of emotions and character interactions forms the foundation of the emotional resonance in Shutter. Connecting to Kate and the supporting cast has been a slow process, but in Shutter #6 I was fully invested in her and her friends and family. Kate and her companions are not a perfect family; they are far from it. This has been one of my favorite elements in Shutter. There has been an increasing trend of families being presented as relatively ideal units where flaws are played off as being minor side effects. The imperfect relationships and personalities found in Shutter trend closer to real life and are able to more easily evoke empathy.

Shutter has introduced an expansive cast, but has come to center on the imperfect family of Kate, her younger brother Chris, and Alarm Cat (the character find of 2014). They all have distinctive personalities, but that's not the key to why they function at the core of the story. They work because each of their relationships is distinct as well. The way in which Alarm Cat interacts with both Chris and Kate is unique. It's not only shown in his actions and words, but in his face and body language. The thought that goes into each page and line of dialogue is clear. Keatinge and del Duca are not simply focusing on individual character, but the relationships these characters share and how they would choose to express them.

All of that allows Keatinge and del Duca to craft moments that are truly impactful. Midway through Shutter #6 is a panel that will take your breath away and cause your eyes to well up. It's not upsetting because it is visceral or shocking (although it is), but because the impact upon Kate and Chris is clear. You understand who these people are, what they mean to one another, and how their actions will affect them. That understanding has been carefully built over six issues, so when this one moment occurs it hurts.

The final two pages summarize much of what makes the series great and what the future holds. It's a big cliffhanger, one that excites and frightens. Del Duca's spread incorporates all the grandiose imagery present throughout the series and uses it to create a bold challenge unlike anything seen thus far. It's a thesis statement for the series as it prepares for its next arc. This is a comic that is going to continue to expand its scope. This is a comic that will hold even bigger, more exciting challenges. This is a comic that will invest you in its characters, so that you actually care (and fear) for them. I want to post the image here, but that would be cruel. I don't want to rob you of the moment where your jaw drops looking at what del Duca has created.

That two-page spreads marks the conclusion of the first collection of Shutter, a comic that has improved with every issue published. The series has grown bolder as it progresses and found an emotional resonance in its characters. Although I will praise the imagination of Keatinge and del Duca without end, the real power of Shutter lies in how it puts that imagination to work constructing a story that draws readers in and invests them enough to genuinely care.

Shutter is not returning until December. That's bad news for me, but good news for anyone who hasn't been reading this comic. It gives you plenty of time to order the first volume or track down these issues and catch up on dinosaurs, ghost ninjas, alarm cat, and all of the wonderful ideas found here. Don't wait. Shutter is that most potent comics combination of big imagination and impactful storytelling.