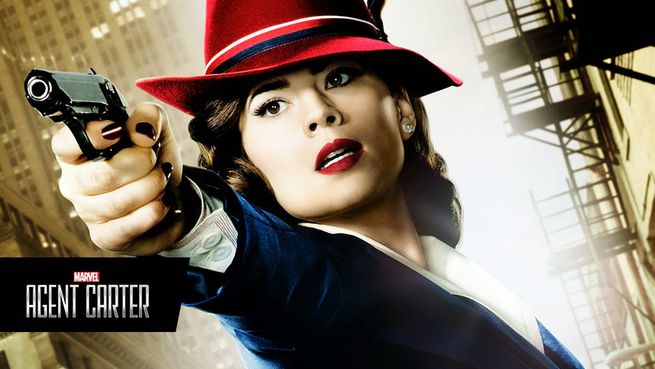 Firing on all cylinders, Agent Carter is providing Marvel fans an unique look into the history of the Marvel Cinematic Universe through the lens of the fan favorite character of Peggy Carter. Building the show however was no easy task. Everything from costume & set design, to the score and the characters featured have all been meticulously thought out.

The two executive producers for the ABC series, Tara Butters & Michele Fazekas sat down with ComicBook.com to talk about the show, it's origins and where it's headed. In this first of three pieces, the duo talk about the show's success while hinting at some things we might see.

Obviously there has been a ton of buzz and excitement surrounding Agent Carter. I imagine these were all things that you were excited for and anticipating, but now at that halfway mark how does it feel to have that strong legion of fans?

Michele: I'm so happy that we're really getting into the meat of the series, and from now until the end of the season we're just on this ride that I'm very excited for people to see. I'm very appreciative that people are so excited about the new twists that we've revealed, and there's more to come.

Tara: There's been such a tremendous response from the fans. They seem to really enjoy James D'Arcy as Jarvis and obviously Hayley as Peggy. I'm really happy that there has been an outpouring of affection for the show.

Are you surprised at the popularity of any of the new characters?

Michele: I think that the smart fans picked up something with Dottie early on. Which was okay, it wasn't a secret that we were planning on keeping for very long about her. People are smart. There's a lot about Angie, her friend at the automat said people really seem to be responding to their relationship as well which is great.

Just in reading people's responses to the guys at the SSR. Everyone loves Susan. Everyone hates Thompson, hates Julie but as you can start to see, and you will continue to see over the next episodes, those characters really getting fleshed out. We're going to learn more about them, they're not just chauvinist pigs.

Are you guys bracing for impact for an "Oh my God" moment along the lines of what happened to your friends over at Agents of S.H.I.E.L.D.?

Michele: I definitely feel like by the end of the eight episodes that the fans will be happily surprised of how we tie into the greater universe.

Tara: Not only that. Peggy's journey, and what happens with her I think will, be very satisfying.

Michele: And there will be surprises to come with her. As far as her having to keep her at what she's doing. And her trying to keep ahead of all these people, and how successful or not successful she is in that. We always try and make everyone smart. So Peggy is smart, but the people around her are smart too. It is a race to see who's going to be able to get away with it longer. There are nice surprises to come the next couple of episodes.

The time period in which the show takes place is an interesting one, because it gives you enough room to essentially explore whatever you want. Are you guys working towards what happens in the Peggy Carter focused one-shot? Or when the show ends is there still room in between to explore?

Michele: Think of the last moment of the one-shot as she gets a call from Howard. Oh you're going to run S.H.I.E.L.D. Think of that as the last thing to ever happen in the Agent Carter TV show. We won't touch on her running S.HI.E.L.D. within the context of the show. This is all of her journey leading up to that. That's how that would fit into cannon.

Michele: Agents of S.H.I.E.L.D. has been dealing with Hydra. We didn't want to just be telling the same story that S.H.I.E.L.D. was telling. Not to say that we won't.

Tara: That is a possibility.

Michele: It's also not that we won't touch on the beginnings of that.

Stay tuned for more with Butters & Fazekas as we dive further into the show, including what Howard Stark really knows, and what other Easter eggs might be lying about that fans haven't picked up yet.

Are you digging Agent Carter? Let us know below and enjoy the gallery for tomorrow's episode!