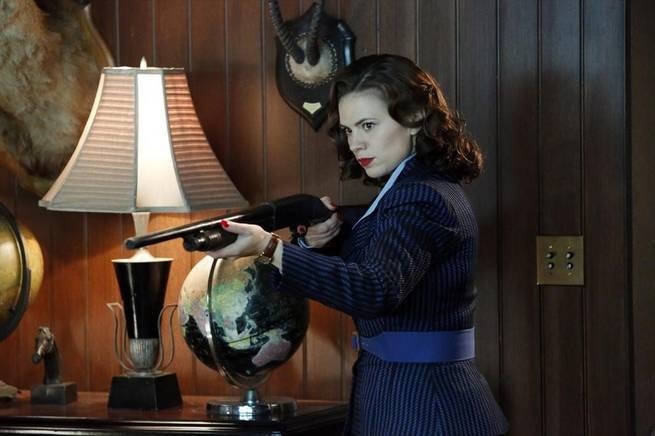 The episode opens inside a radio studip, where another episode of the Captain America radio show is in progress.

Agents Carter, Thompson, and Souza go to investigate the brutal scene at the movie theater where Ivchenko set off item-17. The bodies have been brutalized, and Carter realizes that they killed each other. Investigating further, Souza discovers the baby carriage, and then soon after finds the canister Dottie carted in with it. Souza accidently sprays the contents of the canister in his own face, and then begins attacking Thompson. Carter tries to pull Souza off, but it takes police force to subdue him.

Dottie is driving with Ivchenko in the passenger’s seat. They’re pulled over by a police officer. Dottie pulls a gun, but Ivchenko has her put it back to avoid drawing attention. Instead, they talk their way out of the ticket…until the officer hears the APB coming over the radio.

Souza wakes up strapped to a bed, with Carter watching over him. He’s disoriented, but then remembers wanting to kill Thompson. The effects of the canister seems to have warn off. Thompson is explaining the effects of the canister’s contents to the SSR, saying it causes psychosis on contact. Carter begins trying to figure Ivchenko’s greater plan when Howard Stark walks in.

Thompson places Stark under arrest, and he and Souza begin questioning him. Stark’s heard about what happened in the theater, which is why he returned. He says the gas is called “midnight oil.” It was tested at Finnow, and was designed to keep soldiers awake. It wasn’t ready, but McGuinness had the military steal some. When it caused psychosis in the soldiers, they dropped it on the Germans at Finnow instead, which is why Stark went out there. Stark is surprised that Souza survived, as the gas causes asphyxiation. Carter figures that explains the voiceless leviathan agents. She reveals Ivchenko is actually Johann Fennhoff, a psychiatrist who specializes in hypnosis. Stark agrees to be the bait to draw Fennhoff out.

Dottie and Fennhoff arrive at an air field. Dottie takes out the guard but Fennhoff hears a radio report of Stark returning a hero and decides to stick around.

Stark is grooming himself and Carter arrives to provide with an armored vest for protection. He’s not impressed, and demands to see his work. He goes to the lab and frets over how the SSR has treated his inventions. He finds a vest of his own design to put on instead. Stark and Carter argue a bit, but seem to come to terms. Stark sneakily grabs the orb with Captain America’s blood hidden inside.

At a press conference, Thompson announces that Stark has been cleared of all charges. A shot is fired at Stark from above. Jarvis escorts Stark away, and Carter spots where the shots are coming from. Jarvis sends Stark to the SSR office in a police vehicle, only to find the officers dead in the alley. The car is driven by the officer who stopped Dottie, now hypnotized by Fennhoff.

Carter and Thompson discover a rifle rigged to fire itself. The poor aim makes them realize the shot was a diversion, and then hear the report that Stark has been captured. Stark tries to bribe the officer driving, but he’s completely under Fennhoff’s control. Carter realizes they want to punish Stark with something worse than death. If the movie theater was a test, then thye must be planning something bigger. Realizing it is VE-Day, they figure they must be planning to hit Times Square, where servicemen will be gathered.

Souza discovers the police car, but the officer is dead and Stark is gone. He’s now in the car with Dottie and Fennhoff.

Souza tells Carter that Fennhoff and Dottie are leaving the city. Thompson says they won’t call off the VE-Day celebration. Jarvis thinks they’re heading to another of Stark’s vaults, where a Stark plane is secretly stashed.

Flashback to six months ago, with drunk Stark showing Dottie, under cover, the vault. In the present, Dottie slaps Stark awake. They are in the secret hanger. Fennhoff tells Stark he was there at Finnow when the Midnight Oil was used, and he was only spared because he had a gas mask. His family died. Fennhoff begins placing blame on Stark, and starts using his ring to hypnotize him. He makes Stark imagine he’s going to rescue Captain America, and Stark takes off in a plane with the Midnight Oil just as the SSR arrives.

The SSR hatches a plan. They want to talk Stark down, but need someone in the air to shoot Stark down before he gets to land, if necessary. Jarvis is the only one with experience piloting a plane, and so he volunteers.

Carter moves in on Fennhoff and Dottie. Dottie moves for her gun, but Carter stops her and has her drop it. She has Fennhoff move away from the radio, and then Dottie attacks. They fight as Jarvis takes off. Carter kicks Dottie out of a window, and she lands, apparently dead, on a plane wing.

Souza and Thompson move to capture Fennhoff, while Carter tries to snap Stark out of it. Fennhoff sneaks up behind Thompson and knocks him out. Souza gets Fennhoff at gunpoint, but Fennhoff starts talking. He tries to convince Souza to “focus.” He tells Souza to shoot Thompson, but Souza hits Fennhoff with the gun instead, then pulls ear plugs out of his ears.

One mile out from land, Jarvis gets Stark in his sites, but Carter tells him not to take the shot. Carter pleads with Stark, saying they all need to let go of Steve Rogers, and Stark finally snaps out of it. Carter goes downstairs to find Dottie gone, leaving only a trail of blood behind. They take Fennhoff into custody.

Some time later, Carter walks into the SSR office and receives a standing applause from her fellow agents. She still hasn’t decided whether or not to stay with the SSR. A senator arrives to thank express his thinks to Agent Thompson for stopping the attack on Manhattan. Souza can’t understand how Carter cannot be infuriated by Thompson taking all of the credit, but Carter just shrugs it off. Souza asks Carter if she’d like to join him for a drink, but she passes, saying she needs to meet a friend.

Jarvis brings Angie and Carter to one of Stark’s homes. Stark has offered to let them stay there free of charge, as thanks for what Carter did for him. Jarvis makes himself available to Carter if she ever needs his help. He says that Stark is trying to negotiate the release of his inventions from the SSR, so that he can destroy them. Jarvis, however, has the vial of Captain America’s blood. Jarvis it took it from Stark, and he thinks it was lost while he was hypnotized. Jarvis give it to Carter.

Later, Carter pours the blood out into the river, and says goodbye.

In the post-credits scene, a muzzle Fennhoff is escorted into a cell. His cellmate turns out to be Arnim Zola. Zola has heard of Fennhoff’s abilities, and would like to collaborate. He tells Fennhoff that they’re in an American prison, and that America is the land of opportunity.