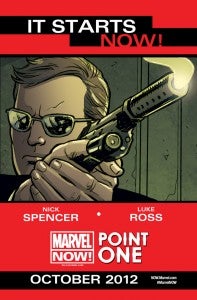 It's a busy day for Luke Ross, the artist behind this morning's Captain America inauguration. He's also got a new preview out for his Marvel NOW! Point One story with writer Nick Spencer, this one featuring (we're assuming) Phil Coulson, the first time we've seen him in the shuffled, post-Avengers vs. X-Men Marvel Universe of Marvel NOW!.

The fan-favorite S.H.I.E.L.D. agent, who was revealed to have been hanging around the comics universe in Battle Scars, appears on another blind promo, featuring nothing but creator names and a character photo, not unlike yesterday's Ant-Man promo with art by Mike Allred.

Marvel NOW! Point One #1 will be on the stands in October and comes from a whole mess of popular Marvel creators. Check out the solicitation information below.