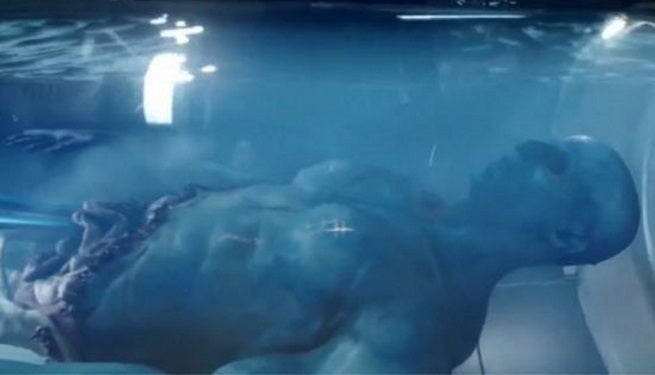 A video shot from the set of episode of Agents of S.H.I.E.L.D. has surfaced online. While it's impossible to say anything conclusive based on just a video, it is full of interesting and illuminating moments.

It's also full of potential SPOILERS. You've been warned.

Here's the video in question:

The biggest spoiler from this video seems to be that we will be seeing more blue aliens in Season 2 of Agents of S.H.I.E.L.D. The narrator continually refers to the blue aliens as Kree, but that remains unconfirmed and there is nothing in the video that actually identifies the blue alien's origin. However, if you watch the video all the way to the end, you will see that the bald man he is pointing out does indeed have a blue arm. Whether he himself is a blue alien or is simply someone infected with blue alien blood is uncertain.

The man with the blue arm has a suitcase with him. No hints as to what could be in it.

The man with the blue arm is also approached by a man in a suit. We don't get a shot of the man's face, but there is a shot of a set chair with the name "Nick" emblazoned on it. The narrator's first thought is of Nick Fury, but Samuel L. Jackson is not on set. Later in the video, we can also see Clark Gregg's chair, labelled "Clark," suggesting that "Nick" is the first name of an actor and not a character. We can't confirm this, but it seems likely that Nick Blood, who was recently cast as Lance Hunter, was on set and could possibly the man in the suit.

The bald man with the blue arm seems to come under fire from a man with a futuristic looking gun. Said assailant is wearing a ruddy red jacket that seems to match the visual style of Guardians of the Galaxy, perhaps suggesting that he came from space. On the other hand, he could just be someone from Earth who got his hands on some of S.H.I.E.L.D.'s extraterrestrial items.

Lastly, we know that Coulson and Skye - the two characters directly linked to the blue alien - are present for the scene, as Clark Gregg and Chloe Bennett are both spotted on set. Also, the Washington D.C. flag is flying, which suggests that the sequence takes place there.

Agents Of S.H.I.E.L.D. Behind The Scenes Hints Blue Aliens For Season 2