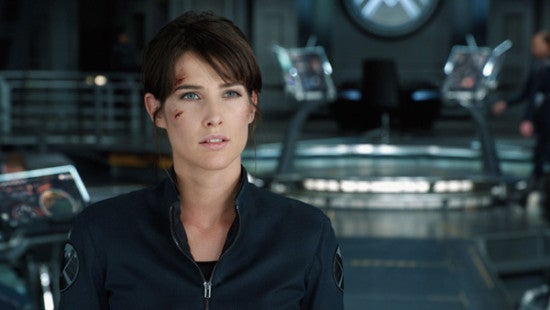 In a brief, new video interview with I am Rogue (embedded below), How I Met Your Mother actress Cobie Smulders said that there is "nothing on the books" that would see her S.H.I.E.L.D. agent character Maria Hill return to Marvel's Agents of S.H.I.E.L.D., although she would love to. Saying that it was great working with series star Clark Gregg and pilot director Joss Whedon again, Smulders noted that her next plannned appearance in the Marvel Cinematic Universe, in Captain America: The Winter Soldier, is a film that's "all about S.H.I.E.L.D." and that she's around more than one would guess from her brief, back-only appearance in the film's first trailer. Captain America: The Winter Soldier is due in theaters in April. The next big event on Marvel's Agents of S.H.I.E.L.D.--an episode that ties in with the events of Thor: The Dark World--is coming in two weeks.

Agents of S.H.I.E.L.D. Has "Nothing on the Books" For Cobie Smulders