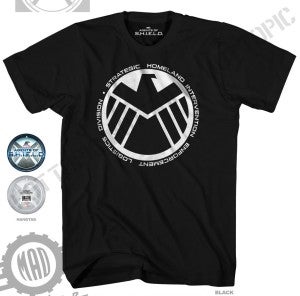 Marvel announced today that following the massive ratings success of their new TV series Agents of S.H.I.E.L.D. (which airs on Tuesday nights at 8 p.m. on ABC but will also re-run tonight), a new line of t-shirts and other merchandise tied to the series is coming. Marvel has unveiled a range of Marvel's Agents of S.H.I.E.L.D. consumer products including T-shirts, accessories, and posters which are immediately available for purchase at ABC.com, Marvel.com, Hot Topic and other specialty retailers. "The breakout success of our new primetime ABC series further underscores the unmatched affinity that fans have for the Marvel brand," said Paul Gitter, senior vice president, licensing, Marvel at Disney Consumer Products. "This new consumer products line will give fans a great jumping off point to enjoy the new series and to extend their passion for Agent Coulson and the S.H.I.E.L.D. organization."

Agents of S.H.I.E.L.D. Merchandise Headed to Hot Topic, Other Retailers