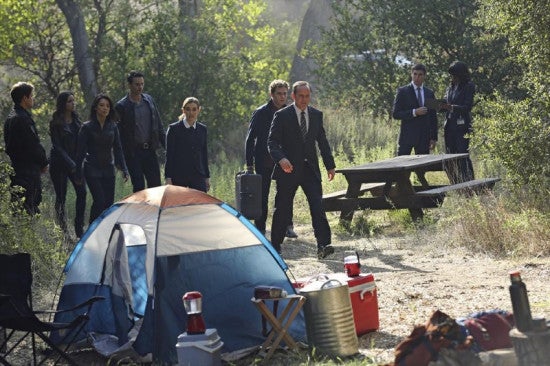 ABC have released a two-and-a-half minute preview of the next episode of Marvel's Agents of S.H.I.E.L.D., titled "F.Z.Z.T." and set to air on Tuesday night at 8 p.m.

This scene is what's generally called the "cold open" in television, those few minutes that most shows have now before the opening credits. In the scene a boy scout troop camping in the woods become the victims of some strange electrical activity; their scoutmaster, Mr. Cross, takes the brunt of it. There are a great many Crosses in the Marvel Universe, but none who seem likely candidates for this character, so that name is likely a throaway in spite of having been repeated a number of times during the clip below.

S.H.I.E.L.D. fans will know that Agent Sitwell, who appeared in Item 47 and will appear in Captain America: The Winter Soldier will be involved, suggesting that the blue, electric power may again be related to the events of The Avengers, the Chitauri invasion or the Tesseract.

You can check it out embedded below via AOL.