The pilot episode of Marvel's Agents of S.H.I.E.L.D. has finally aired--after what seems like the most build-up for any TV series since The Walking Dead slowly shambled its way to AMC four years ago. And it was a pretty cool show. We actually knew that, in the abstract, since one of our contributing writers went to D23 and wrote it up for us--but it's nice to see these things with your own eyes, isn't it? In any event, as we're wont to do when something big comes our way, we took some notes as we did our recap of the episode regarding what our favorite moments from the show were. What made the cut? Well...! 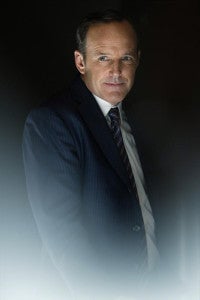 Coulson emerges from the shadows This is the first of a couple that were actually widely circulated already--although it not only worked well in context but actually worked better in the show because it wasn't quite as dumbed down as it was in the TV spots. Ward, not particularly happy to be getting reassigned, reacts all smarmy and self-assured when he's told that the order he's receiving came from Coulson. "I'm Level Six," Ward says, "I know Coulson died before the Battle of New York." That's when Coulson pops out of the corner, welcoming Ward to Level Seven and explaining that he just couldn't help himself--there's a light bulb out and that corner is just so dark dark... It was a great piece of comic relief, and Gregg delivered it masterfully. That he still gets to do some of that in spite of being the lead actor in what's ultimately a very serious show is a nice reward for all the work he put into making that part of Coulson work for him in previous appearances. 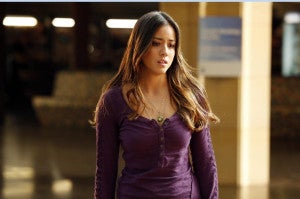 Bagging Skye Again, we've seen this one--but it doesn't mean it wasn't pretty funny. The humor in this show, as often as not, worked as well or better than the actual action and drama. That could be problematic going forward but at least for the first episode it carried the day. Skye got a little too big for her britches, boasting about her unstoppable blahblahblah, and it didn't matter because the people she was boasting to were waiting outside her door--literally--to take her down a peg, then throw a bag over her head and take her away. Inside the Bus, Ward played the badass card to intimidate her--and it sure seemed to be working until... 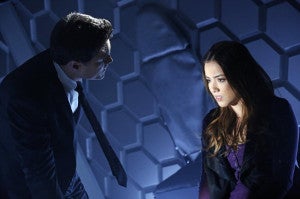 ...Coulson tried to gain Skye's trust by dosing Ward with truth serum and he immediately revealed that he thought she was hot. Coulson left them alone in the room and told her to have fun, and she immediately took off her jacket, showed some cleavage and started asking Ward questions he didn't want to answer. Even though he'd been intimidating her a few minutes before, she had at least been putting up a token facade of arguing back ("Well, I'm in your secret base, now. How do you know this wasn't my plan?"), whereas Ward didn't manage that much. The drugs prevented it and, at least in this episode, it's 1-0 Skye. It would have been nice if she didn't need to resort to thrusting her boobs out to make it happen, but since she's probably the most likable character on the show outside of Coulson, we'll let that slide. Also, I'm calling my shot: the shippers will lock down "Skyward" as a thing by the weekend. 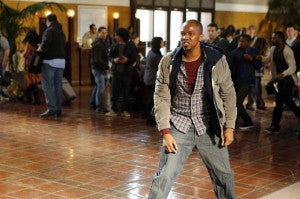 Extremis revealed This didn't feel like as big a moment onscreen as I think the plot dictated that it was--the fact that, following on the heels of Iron Man 3, the villains were all Extremis powered! Who? How? What? Our guess is that The Mandarin wasn't really a ruse and is somehow tied up in all of this, but that's really just spitballing. In any event, we're glad they reached out to the features side and made that happen because the mad scientist/human bomb thing was close enough to Iron Man's plot anyway that connecting the two not only made sense, but if they hadn't it would really have hurt the show. Flying Lola I want to know who the first person in the series will be to say "Roads? Where we're going, we don't need roads." It was hardly surprising to see; they'd built up all episode that Lola had all kinds of cool, crazy stuff going on under the hood and the fact that we only got to see one just leaves us open for more down the line.