The episode begins, as we've seen, in Stockholm, where a group of men dressed in suits and masks make their way through a crowded outdoor square, all handcuffed to briefcases. They make their way into the subway, followed the whole time by a quiet young woman played by Pascale Armand. Once on board the train, she seems to "sense" something about the men with the cases, smashes a control box to shut out the train's interior lights, and there's sounds of a scuffle. When the train stops and the lights go back up, one of the men is dead and the others unconscious or dead; the dead man has had his case removed, the hand severed from his body. Outside, the woman enters the combination code on the briefcase, removes a container full of diamonds and vanishes without a trace as the next train passes. On board the bus in midair, Coulson is making small talk in the cockpit with May when she obliquely tells him to go away. 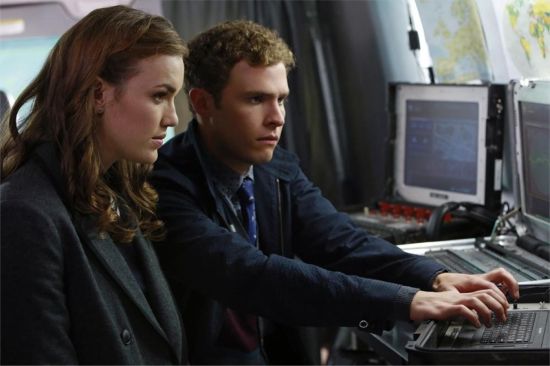 In the lab, Fitz and Simmons are describing a new "Night-night pistol" to Ward. Coulson comes to ask about Skye, and Ward says nobody's seen her in a while. She's taking some time in her quarters when Coulson asks her for help figuring out what's going on with the diamond thief. On the ground, May and Coulson are walking to the subway car with Skye, explaining to her what had just happened. Skye says it sounds like an inside job but Coulson doesn't think so. Skye suggests the possibility that the woman had ESP or something similar, which May doesn't believe in. Coulson says he picked this particular  mission. Skye figures out that the Internet works on her phone in the subway and deduces that of course people would have been taking photos of the odd sight of 55 men in suits and creepy masks. This allows them to scour social media for photos until Coulson finds the woman he's looking for: It's Akela Amador--and Coulson trained her. Amador was a S.H.I.E.L.D. operative that was presumed dead and has been traveling on a bogus passport; Coulson has long assumed she was alive and figured out that barring May's involvement, Amador was one of the only women who could do these jobs alone. Coulson tells May not to alert upper management to her being alive; the rest of the group leaves him alone with Skye, where he admits that he may have pushed Amador too hard; that she's nothing like Skye. 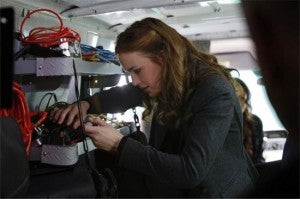 At Amador's hotel, she closes her eyes and grabs a golf club, tackling a man who she told to come alone. He has bodyguards outside, and she's not happy about it. He's there to buy the diamonds, which she produces; she's been hiding them inside of fake golf balls that dissolve in water. He "buys" the golf bag with the rest of the diamonds hidden inside with something he says will give her "access to all levels," though she admits she has no plan for using it. Back in the S.H.I.E.L.D. van (the "short bus"), Fitz and Simmons are bickering in the backseat. May calls in and tells Coulson that the bosses wanted an update and she didn't tell them anything. Ward and Coulson leave the van, where Skye finds a server and a signal. She calls Ward to ask about where to pee and whether there's food. Coulson and Ward walk into a hotel and ask about Amador; the manager says Amador saved her life by telling her she was sick; when she went to the doctor it was a tumor. She tells them that she's sure she knows they're coming. Back in the van, Fitz, Simmons and Skye are watching video they pulled off the data stream, which shows their van. Someone starts monitoring what's inside the van, so they can see themselves and realize that's what's happening. Back on the Bus, May is looking very serious. The team makes their way back, where Ward tells Coulson that they're lucky she didn't break anyone's bones; just knocked over the van so she could get away. Skye gets the signal back and they're watching Amador looking into a mirror. Coulson asks where the camera is, and May deduces it's her eye. It's tech that's ten years ahead of what S.H.I.E.L.D. has, says Fitz. Eventually they figure out that Amador isn't just being watched; she's being controlled. That backs Coulson in an argument with the rest of the group that they should be helping her instead of hunting her. Skye comes in to see Coulson in his office, saying that she trusts him, whether or not she trusts S.H.I.E.L.D. and that if he believes Amador deserves a second chance, they should give it to her. 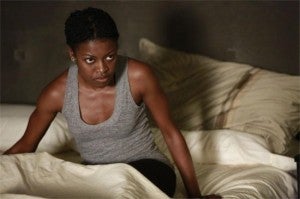 Back in the lab, Fitz has fallen asleep at his table. Coulson asks where May went; they play back video from the signal that indicates where Amador is going to go. May goes to see her, and Amador says that either she kills May or her "controllers" will kill her. They fight. Amador starts to get the better of May but before she can kill her, Coulson comes in with the Night-night pistol and knocks her out. She wakes up on the bus, and Coulson tells her that they hijacked her feed; Ward is sending a signal that mimics hers, and as far as her handlers know, she's not been picked up. She's been monitored for years, she tells him, and asks why he's helping her. She tells him taht if she'd listened to him, her team might still be alive and she wouldn't ever have been caught. Ward and Skye arrive at the building where Amador's "mission" is to be carried out. She tells Coulson that she woke up at the bottom of a coal mine, blind in one eye; years later she was extracted by an anonymous team of baddies who forced her to perform missions for them under threat of a kill switch in her eye that would end her life if she didn't cooperate. At the building where the mission is to go down, Ward gets his assignment and leaves the car, reminding Skye that he can't look at her (because of facial recognition software that would ID her and activat Amador's kill switch), so he goes into the building and leaves her in the car to watch. Back on the Bus, they begin trying to ID Amador's handler/captor using subtle clues; she thinks he's probably British because of his use of language; his poor typing skills lead Coulson to think he's got thick fingers, so he may be heavyset. Simmons is ready to try and disconnect her kill switch while Ward is making his way through the building en route to his target. May is watching, the surgery on the bus, dubious. In the car, Skye sees that Ward's target is in the room he's standing in front of. They're worried that they may have to figure out how to work around a kill order as opposed to a knockout, and Ward is confident he'll know what to do either way. Then the orders come: Seduce him. Ward stands outside the door, wondering how to move things along. Skye tells him that he's going to have to approximate seduction by being friendly. When he goes in though, the man has no interest in being friends and he has to knock him out. He crosses through to the next door, where there are a pair of men typing and doing elaborate math on blackboards all around the wall. Ward stands in the room taking in the tableau, not having yet received orders, and the men seem uninterested in him. On one wall, there is what appears to be cybernetics pictured on the board; Ward gets the message "mission complete. Good luck." Outside, he realizes that he needed the guard for a Lost-style password that has to be entered every few minutes to prevent alarms going off. He can't enter it, and ends up wandering through the building and then eventually running from another guard. On the Bus, Fitz and Simmons are having a bit of trouble with the surgery; her whole eye is artificial, apparently, and he's not sure how to remove the eye without activating the kill switch. In the building, Ward is using his night-night gun on the guards, but he accidentally ends up in front of a reflective window. He tells Fitz via the comm to cut the wires--now--because he's likely been picked up by the facial recognition software. As soon as the eye is removed, they put it in a box and it blows up inside. Coulson, out in the field, finds out who the handler is and approaches him--then he presents his badge and the man drops dead. He was a disgraced MI-6 agent who was no more in control than Amador. Amador will get a fair trial, Coulson is determined--he walks away, and Amador asks May what happened to Coulson--what they did to him. Back at Skye's room, Coulson approaches her and they have a short heart-to-heart where she tells him she likes that he gave Amador a second chance and that he has her back. At the S.H.I.E.L.D. logo, Coulson has a voice-over now that says "We'll be back in a moment," for the viewers who don't know about the PS. The week's after-the-credits sequence is Fitz playing Blackjack with Ward, taunting him that he has a tell and that if he watches him carefully, Fitz always knows. On the other end of his comm, Skye is wearing the glasses that mimic Amador's eye "powers" and tells Fitz that if she uses the backscatter function, not only will she see Ward's cards, but she'll see Fitz with no clothes on; Fitz considers this, folds and runs away. Skye turns the glasses on and checks out Ward.