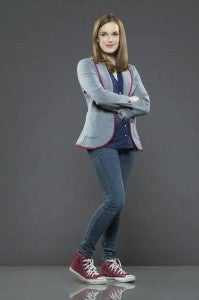 While the opinion on the Internet is pretty well-set regarding the pilot episode of Marvel's Agents of S.H.I.E.L.D., set to debut on Tuesday on ABC, based on early screenings at Comic Con and D23, nobody has seen any of the follow-up episodes yet--and that's about to change, surely, as critics start to get screeners but with the year's most anticipated pilot less than 60 hours away, series actress Elizabeth Henstridge is calling their shot: things will continue to blow audiences away. "Every week there's a new weird thing going on. We just pinch ourselves constantly," Henstridge told Zap2It. "Each script we get, we can't believe it's bigger than the first. Yes, I'm excited for people to see the premiere next week, but then No. 2 is so huge that we can't wait for that either." Saying that they're more excited than they are nervous about how the series will perform, the actress added, "We're so proud of it and we're just excited to share it now and see what people think. We definitely feel like we're welcoming new fans and then also kind of satisfying current fans. I think we're just excited. We love it, and we just feel like the fans are going to love it and new people are going to love it." The Marvel Universe, of course, is a big place and while there will be a lot of people looking out familiar faces from the comics and movies, Henstridge says that as actors they're focusing on their own characters, who are made up for the show. "There's definitely story arcs that's going to make people invest in the characters and really care about what happens to them," she said. "In the other sense, you can dip in and out. You don't need to know the full backstory to enjoy each episode in its own right."