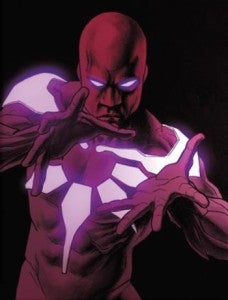 The only characters we've seen so far on Marvel's Agents of S.H.I.E.L.D., whose names were already familiar from the comics, have been pretty limited in their impact on the show, but it seems as though we're going to see ABC's Avengers tie-in series give it another go.

Not surprising, perhaps, since Marvel Television head Jeph Loeb said, "Stay tuned, there's a plan," when asked about the prospect by The Huffington Post yesterday.

Scorch was the name of a villain with fire powers early in the season and that name, along with a bare-minimum character description (Asian male), was carried over from the comics. A similarly small appearance was made by Graviton, who appeared in his human identity as scientist Franklin Hall and got powers only in the closing seconds of an episode. Not long after that, Victoria Hand, a familiar S.H.I.E.L.D. and S.W.O.R.D. agent from the comics, was introduced but she's not had much of a role so far this season.

Next up to bat will be Donny Gill, also known as Blizzard, who will apparently be a primary antagonist in the series' upcoming fourteenth episode, titled "Seeds."

Blizzard is a bit more morally gray than many supervillains, having been a member of the villains-acting-as-heroes team the Thunderbolts and having been briefly "reformed" after a confrontation with James Rhodes. He has, as his name suggests, weather- and cold-based powers...which seem as though they'll be pretty key to the episode, according to the official description: