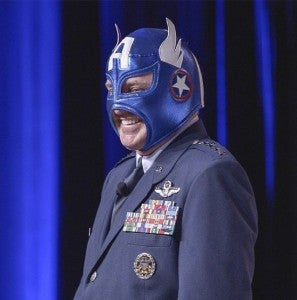 How popular are comic book superheroes becoming? Popular enough that it looks like even the Air Force Chief of Staff is getting into cosplay.

The Air Force tweeted a photo of Welsh in the Captain America mask, but no explanation was given as to why he was wearing the mask. Here are our personal theories: it was superhero dress-up day at the Air Force, he just came from a local Comic Con, or it's part of a tie-in promotion with Marvel Studios upcoming Captain America: The Winter Soldier.