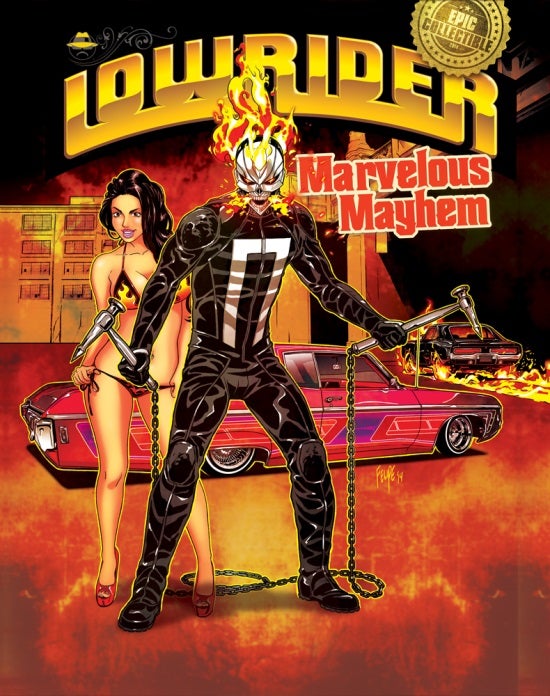 Marvel Comics and Lowrider Magazine are partnering up for a special issue featuring the All-New Ghost Rider. In April, Lowrider Magazine will feature a special cover story, "Marvelous Mayhem," showcasing the new Ghost Rider, Robbie Reyes. The cover, drawn by All-New Ghost Rider writer Felipe Smith, has Ghost Rider posing with a cover model and the lowrider custom car of the month. The issue will also have an exclusive interview with Marvel Editor in Chief, Axel Alonso, and Felipe Smith, as well as artwork from All-New Ghost Rider #1. "Robbie, the most recent host of the Spirit of Vengeance, Ghost Rider, represents the quintessential individual that would be a reader of Lowrider," said Jonathan Rheingold, Marvel's V.P. Custom Solutions & Ad Sales. "When the Marvel editorial team was seeking a magazine partner to help promote the release of the ALL-NEW GHOST RIDER, LOWRIDER MAGAZINE was at the top of our list. This is a great illustration of life imitating art and art imitating life." Joe Ray, Editor of Lowrider Magazine echoes Rheingold's comments, "The lowrider community is a largely Hispanic-dominated culture whose influence was born out of the Los Angeles lifestyle. With the new Ghost Rider being of Hispanic descent and out of East L.A., many of our readers and fans will instantly have a connection with him and want to explore a comic that echoes their own unique Los Angeles and auto-enthusiast lifestyle." In April, Marvel will also feature full-page advertisements for Lowrider Magazine across its line, with more high exposures press announcements to come. All-New Ghost Rider #1 hits shelves in March.