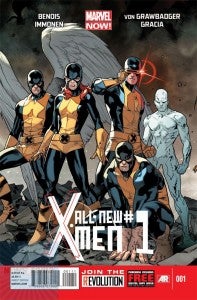 Brian Michael Bendis and Stuart Immonen launch the old children of the atom into the present of today with the release of All New X-Men #1. Still reeling from the events of Avengers vs. X-Men, the mutant world is as chaotic as ever with the appearance of new mutants all over the globe. Cyclops and his extinction team are wanted criminals as they fight for mutants everywhere, regardless of how radical their methods may be.

The book brings a lot of plot points in quick and hammers away at a fast pace. We open with a new crisis for Beast which becomes his motivation for the decisions he makes later in the issue. We get the reveal of two new mutants and see Cyclops’ team taking it upon themselves to welcome them into the fold. Meanwhile the other side of our X-coin at the Jean Grey school can’t believe what their old friends are up to. This all leads up to us checking in on the X-Men of yesterday. They actually seem to handle the situation they find themselves in pretty well. At least in this issue.

It’s nice to see Bendis branching into new reaches of the Marvel Universe. His work on Ultimate Spider-Man is still his best for me, but his other stuff was starting to look like he was suffering from a little bit of burn-out. It’s been a long road for the man that has been the conductor of the Marvel symphony for the past eight years. The pay off has been great so far. MARVEL NOW feels fresh and new while keeping prior continuity intact. This will be what separates it from the New52, which already feels stagnant and boring a year in.

The fun part about this book is going to be seeing the younger X-Men dealing with their future selves. It’s the selling point, and I can’t wait to see new and old Cyclops going at it. I love Cyclops. Always have, always will and I enjoy the revolutionary he’s become. It’s what makes the X-Men series great and a top tier franchise at Marvel. It always makes you question yourself and your beliefs. At one point, you’ve got to stop and say to yourself, “I can see Magneto’s point.” As Scott has grown, his world view and experiences have shaped him into the man he is. He now sees how important the survival of his species is and how those he’s devoted his life to helping wants to seem them caged or destroyed.  Will young Scott come around to his way of thinking? Will any of the younger X-Men be swayed by their newfound knowledge of their future? What will our Scott think when he sees Jean pre-Phoenix alive and well? The possibilities of this book are numerous and it will be great to ride along.

Stuart Immonen always brings his A-game and this time is no different. His characters are all dynamic and each one feels unique. The book is dialogue heavy, which is to be expected with BMB writing, and Immonen never lets these moments seem boring with tons of great expressions. His action scenes are big and impressive and his page layouts and engaging, never slowing the pace of the book. This is a popcorn comic with substance. It’s a nice combination.

All in all, this is another step in the right direction for the NOW initiative. Marvel promised a shift in the status quo for the whole line with the conclusion of Avengers vs. X-Men and so far, they have delivered. The X-Men line’s future looks especially bright. It’s nice to see them at the forefront of the Marvel Universe. The X-books have been pretty self-contained for the past few years, dealing with their own problems, but now everyone from the Avengers to the Fantastic Four are dealing with the repercussions from the mutant world. With Brian Michael Bendis now adding to this rich tapestry, things can only get better.