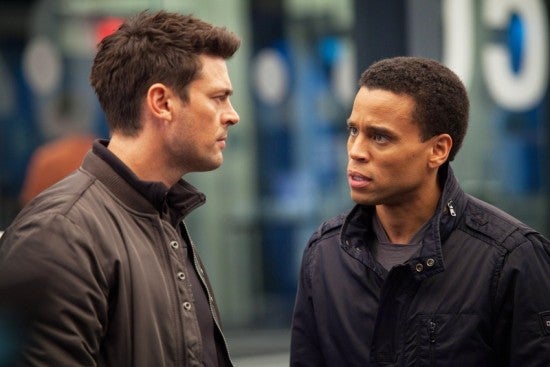 The first eight minutes of footage from the pilot episode of J.J. Abrams's new Karl Urban-starring sci-fi cop drama Almost Human has been released online to Hulu viewers. You can see the embed below. The series, originally set to debut this week, will instead debut as part of a two-night "event" on Sunday and Monday, November 17 and 18, in the hopes of taking advantage of a strong NFL double-header lead-in on Fox. Urban, of course, is a big-screen marquee name, and the experiment of taking his face to the small screen is an interesting one. He had just made the jump from supporting roles (like Bones McCoy in the Star Trek movies) to a leading role in Dredd, which didn't do what Lionsgate wanted at the box office but has gone on to become a massive cult success and has reportedly made more money on home video than it did at the box office (take that with a grain of salt, since home video numbers are nearly impossible to track--streaming and rental numbers, doubly so). Many viewers will, of course, flash back to Dredd when they watch Almost Human, wherein Urban plays a gruff, urban police officer in a not-too-distant, science fiction future. His partner here isn't a psychic who refuses to wear her helmet, but an android--and Urban's character doesn't much cotton to that sort of thing. Releasing the first eight minutes--or the portion of the episode leading up to the first commercial break--is likely a sign from Fox that in spite of the delay, they've got nothing to hide. Whenever these things happen, the networks will say it's to better promote the show, but that's so often not true that it's important to distinguish yourself when you think the fans will really get what you're doing. Abrams, too, has a history with this kind of thing; last year, Revolution's pilot was put online on Hulu and at the NBC website for free streaming before the series premiered on the air.