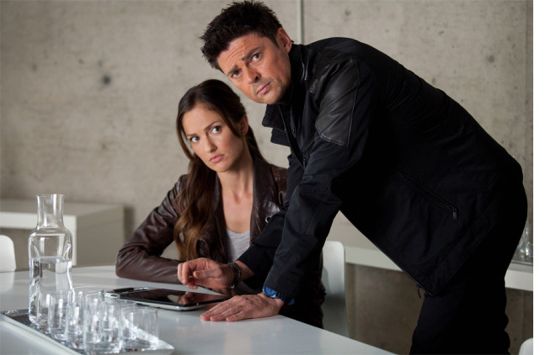 Fox has released a couple of sneak previews for tonight's episode of Almost Human, which is called "Perception." In the first sneak preview video, Kennex and Dorian are investigating two girls dying in separate locations within minutes of each other. The second sneak preview video is a dual promotional video with The Following. In the "Perception" episode of Almost Human, when Det. Kennex and Dorian investigate the simultaneous and sudden deaths of two genetically-enhanced – or "chrome" – children, a fatal dose of the perfect designer drug appears to be the cause. As the investigation unfolds and a recent drowning victim is mysteriously connected, the case takes an unexpected turn. Meanwhile, Kennex endures painful flashes from the past and pays a visit to the recollectionist Almost Human cast includes Karl Urban as John Kennex, Michael Ealy as Dorian, Minka Kelly as Detective Valerie Stahl, Mackenzie Crook as Rudy Lom, Michael Irby as Detective Richard Paul, and Lili Taylor as Captain Sandra Maldonado. The "Perception" episode of Almost Human airs on Monday, February 10, 2014 from 8 PM to 9 PM ET/PT on FOX.