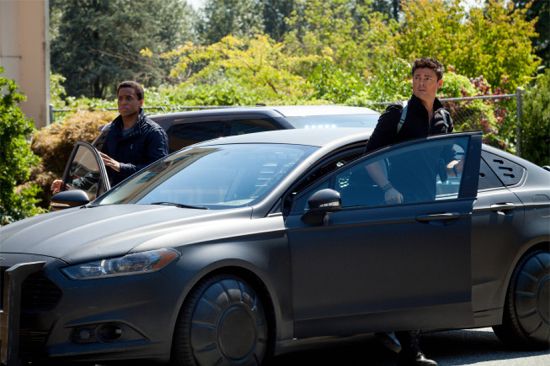 FOX has released two preview clips for tonight's episode of Almost Human, which is called "Arrhythmia." The first clip is various scenes from the episode, which centers around a black market for vital organs. In the second clip, a man bursts into a hospital with a gun demanding that he be put on life support, because he's going to have a heart attack. Director Jeff Thomas and actors Karl Urban and Michael Ealy provide commentary, explaining that bio-mechanical hearts are being sold on the black market with timers. People have to keep going and buying new hearts before their time runs out. According to the FOX description for the "Arrhythmia" episode of Almost Human, Detective John Kennex and Dorian respond to a suspicious death at a hospital where – before having a fatal cardiac arrest – a man claimed someone was trying to kill him, and inexplicably knew his exact time of death. As the investigation unfolds, a black market for vital organs is uncovered in which bio-mechanical hearts can be resold and remotely "shut off." As the team fights to find the pulse of this tech-centric crime, Dorian reconnects with a decommissioned DRN. Almost Human cast includes Karl Urban as John Kennex, Michael Ealy as Dorian, Minka Kelly as Detective Valerie Stahl, Mackenzie Crook as Rudy Lom, Michael Irby as Detective Richard Paul, and Lili Taylor as Captain Sandra Maldonado. "Arrhythmia" episode of Almost Human airs on Monday, December 16 from 8 PM to 9 PM ET/PT on FOX.