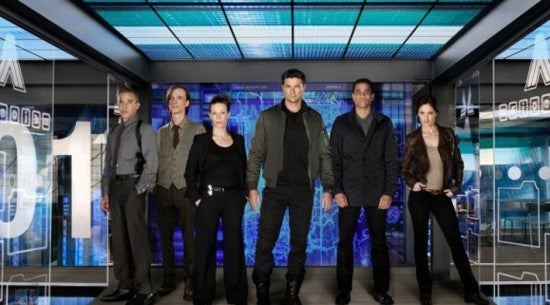 Karl Urban, who plays "Bones" McCoy in J.J. Abrams's Star Trek films and played Judge Dredd in 2012's Dredd 3D, has made his way to network TV, where he now plays Detective Kennex on Almost Human.

The network pushed the premiere of the series from late October until now so that they could capitalize on a one-two punch of a two-day premiere binge, bolstered by Sunday and then Monday football lead-ins.

Because nobody loves Dredd like ComicBook.com, we figured we'd give this series a chance. the two-part premiere certainly impressed in terms of the performances and the production value, even if the script was a bit dodgy at times. 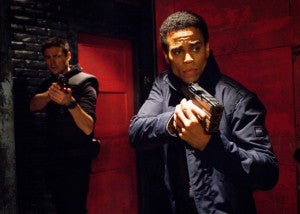 The first episode, which aired last night, followed Kennex as he came back from a traumatic--physically and mentally--injury in which his (human) partner was killed and he was left comatose for months. The story picks up two years later, as Kennex is trying to reclaim his memories of the event, using illegal pharmaceuticals and electronic stimulations, by blackmailing a below-board doctor into helping him.

He can't quite remember who it was he saw masterminding the attack--led by a masked group of organized criminals who already knew the police were coming before they arrived. What he can remember--and has saved on his phone--is his lovely, missing girlfriend, who left him a charming message from a lovely tropical locale, telling him she'd see him soon before he went into a coma and she vanished.

Returning to work, Kennex is paired up with an android partner--he objects, but this is now mandatory for all cops and his commanding officer notes that she's got enough paperwork saying he should never, ever be returned to duty that just putting him on the streets is a risk for her, but she believes in him and wants to make it work. He reluctantly takes the robo-cop, which annoys him so much he tosses it out of the moving police car, where it's crushed by traffic on the freeway.

As a result, he's downgraded to a previous version of the sidekick-bot--one from a line that is no longer widely used because their Genuine People Personality software made them prone to dangerous breakdowns. The DRN model, nicknamed Dorian, acts with more free will and autonomy than did the newer model, which was strictly by-the-book. It's also more ready to show frustration with Kennex's verbal abuse.

From here on out, though, we'll call Dorian a "he," not an "it," since that's the point of the series so far. 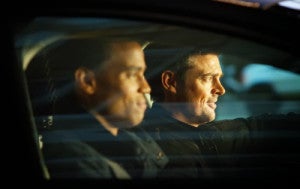 The group Kennex had been stalking through clues, conspiracy theories and his own half-remembered trauma-dreams are, as it turns out, staging an elaborate attack on police headquarters in the hopes of recovering a piece of evidence. The evidence has been intentionally mislaid by the officer who originally logged it, as he's discovered they're after it and wants to make it harder for them. They kidnap him, trap him in a box and then spray him in the face with a bioweapon designed to specifically target police (in the not-too-distant future of this series, cops have to get a handful of specialized innoculations, and the pilot went all Jenny McCarthy on audiences to explain why that's secretly going to kill them all when the bioweapon targets the vaccines).

Using a special blend of technology and policework that only his outdated robot can manage (the newer ones can't process information the human way and humans couldn't access the computerized information quickly and effectively enough to be useful),  Kennex manages to call it into the station and foil the bad guys' plans, even if a bunch of people get shot up along the way during the botched raid. In the end, a female robot stares up at the audience from the evidence bins, hinting at things to come, and Kennex learns a valuable lesson about the nature of the soul, and not throwing your partner out of a moving vehicle. It's touching, really.

Tonight's episode fulfilled the promise of fembots to come quickly and efficiently; we were dealing with the pleasure industry. While the human-looking androids of the police department are basically military hardware with skin wrapped around them, the gals in this week's episode are really, really, really high-end blow-up dolls, for all intents and purposes. Except that they're wrapped in actual human DNA. 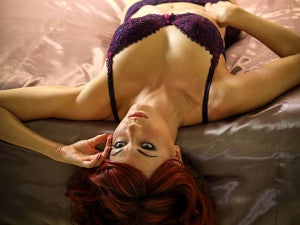 The episode begins with a man whose interaction with a prostitute is very odd; he's scanning her with a variety of electronic tools and then taking a hair sample when her apparent pimps, two men whose faces are electronically masked from security footage, kill him and then set off a kind of DNA grenade that pollutes the crime scene.

There's a bit of Odd Couple-style bickering on the part of Kennex and Dorian as they make their way up to the scene; while the faces can't be seen on security footage, Kennex sees that the pimps took the victim's bag. Dorian can see that the escort is an android. The victim, apparently, was a designer of "sexbots." His company had just declared bankruptcy; his assets are in a repo facility, where the police make their way to inspect evidence.

Sebastian Jones (the victim) was being sued, according to a summons Dorian finds at the scene; headquarters calls in, telling them that the unregistered sexbot they're looking for is leaving the DNA of a recent kidnap victim everywhere she goes.

Another woman is taken from a mall parking structure, where she has left her son in the car to throw away a cup of soda. Next we see him, it's in Kennex's office, where he's introduced as Victor. They want to know what happened but the kid is not responsive to Kennex until he bribes the kid with a toy giraffe that seems to come to life when Kennex taps it. The kid describes the car and the two men who took his mom. 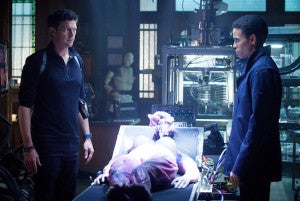 The cops figure out that the car is using stolen plates; they want to track that down but figure the best chance of actually finding the kidnap victims is getting their hands on the sexbot so that they can access her memories. Given the fact that accessing memories of a destroyed robot was key to last week's adventure, one has to feel a bit Pushing Daisies about all of this; will every week be driven by key intel gleaned this way?

Jones's old business partner was the one suing him, and so they go to his new sexbot showroom. Along the way, Kennex explains the idea of consoling the child, what you say and why, in case the mother dies; it's revealed that he never spoke to his dead partner's son after he got out of the coma.

At the had guy hideout, Victor's mom is being menaced while the cops are talking to his former partner. He tells Dorian that the latest sexbots are using elements of his emotional software. Jones over-invested in the next generation of sexbots and then an Albanian consortium lost them their biggest customer, when they said they had  a new supplier. Dorian hacks into Jones's customer records to find the Albanians.

Kennex and Dorian bring a team of cops to the Albanians' nightclub, where they're checking the bots for human DNA. The Albanians see it and are concerned. The Albanians say they don't buy from Jones and Shaw anymore because they make their own now; before they get too deep into the conversation, Dorian figures out that they're lying based on their vital signs and pulls Kennex off.

The cops had managed to find where the car that took Victor's mom went; they make their way to an industrial facility where they search the building for signs of trouble and find the hotel android mangled and unrecognizable. It's been damaged in a very special, specific way to scramble her memory and prevent evidence-gathering.  They figure that the DNA in the hotel came from the kdinappers harvesting the skin from the women they abduct.

Kennex and Dorian talk about setting up a dating profile for Kennex; when Kennex describes his ideal woman, Dorian tells him that he just described Detective Stahl, the woman who provides their intel for investigations.

She calls in a location for the Albanians; Kennex pulls over the silver car and finds them in possession of a sexbot with human DNA on it. She's programmed to be unhelpful in interrogation and reiterates a lot of the same lines that the original bot told Jonnes at the start of the episode. She wants to see that bot, and Dorian figures out that her emotive protocol have made her miss the girl. She names one of the Albanians as the man who pimped her out, and so the cops storm the nightclub, nearly catching doctors in the act of trying to harvest skin from Victor's mom--except that it's the wrong building.

The club has been totally abandoned; Dorian interfaces with a chip he finds in the club to find the skin lab. The personality chips in question will give a GPS coordinate of where the sexbots were born. Back at the lab, the tech support guy accesses the memory and finds where they need to go; the cops make their way there, finding the lab still full of Albanians trying to clean out the evidence and Victor's mom half-dead but responsive. They tell her Victor will be happy to see her.

Back at the office, Dorian tells Stahl that Kennex has a date from his profile, to Kennex's mortification. The boss-lady tells them that they have to deactivate the sexbots who have human DNA and Dorian says he wants to be there. He consoles her with some basic human platitudes as they deactivate her and prep her for destruction.

Kennex goes to his partner's house to talk to the man's wife and son, where she greets him at the door with a hug and then brings him to see the boy.