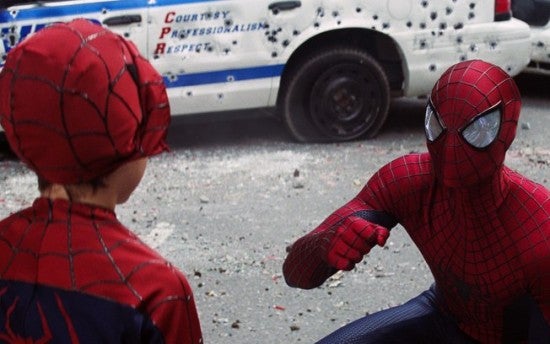 Today's afterparty concert event for last week's U.S. premiere of Marc Webb's The Amazing Spider-Man 2 will be streamed live online via Yahoo! Movies, and you can watch it here.

Beginning at 8 p.m. EST, Pharrell Williams, Alicia Keys, Hans Zimmer, and Johnny Marr will perform music from the film at an exclusive concert.  Yahoo! will capture the performance and give fans digital front row seats to watch the concert.

Fans can watch live and join in on the social media conversation using #SpiderMan.

The Amazing Spider-Man 2 hits theaters nationwide on May 2.

You can find the video and official description embedded below.

We’ve always known that Spider-Man’s most important conflict has been within himself: the struggle between the ordinary obligations of Peter Parker and the extraordinary responsibilities of Spider-Man. But in The Amazing Spider-Man 2, Peter Parker finds that his greatest battle is about to begin.

It’s great to be Spider-Man (Andrew Garfield). For Peter Parker, there’s no feeling quite like swinging between skyscrapers, embracing being the hero, and spending time with Gwen (Emma Stone). But being Spider-Man comes at a price: only Spider-Man can protect his fellow New Yorkers from the formidable villains that threaten the city. With the emergence of Electro (Jamie Foxx), Peter must confront a foe far more powerful than he. And as his old friend, Harry Osborn (Dane DeHaan), returns, Peter comes to realize that all of his enemies have one thing in common: Oscorp. Directed by Marc Webb. Produced by Avi Arad and Matt Tolmach. Screenplay by Alex Kurtzman & Roberto Orci & Jeff Pinkner. Screen Story by Alex Kurtzman & Roberto Orci & Jeff Pinkner and James Vanderbilt. Based on the Marvel comic book by Stan Lee and Steve Ditko.

My Hero Academia May Hit Izuku with a Crippling Reveal Soon