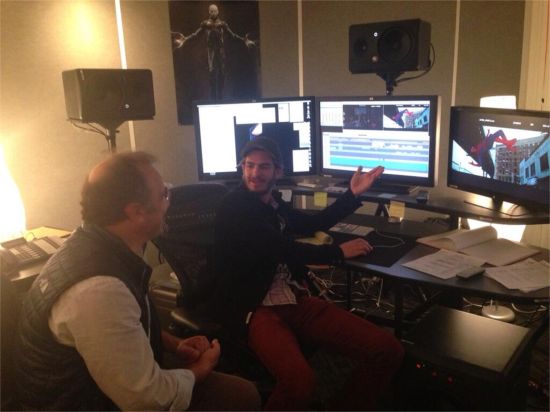 Recently, there's been a trend of superheroes sporting beards. Batman, Superman, and Wolverine have all let their beards grow out in recent movies. Even though Wolverine's always been known for having extra facial hair, Hugh Jackman went full, shaggy beard for some scenes in The Wolverine.

Is Spider-Man the next to join the superhero beard club? Amazing Spider-Man 2 director Marc Webb just tweeted out a photo of a bearded Andrew Garfield. However, it's actually from post-production, so Peter Parker will likely be as clean shaven as ever in Amazing Spider-Man 3.

Webb tweeted, "Andrew Garfield kindly showing editor Pietro Scalia how it's done." In addition to the bearded Garfield, the other interesting thing about thi particular photo is there appears to be a new poster of Electro on the wall in the background.