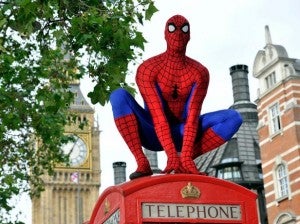 The upcoming sequel to this year's The Amazing Spider-Man, which begins shooting in February 2013, will reportedly both film and take place at least partially in London, according to Bleeding Cool.

The sequel will use the production title London Calling, a reference to the classic album and song by English punk standard bearers The Clash. While nobody has seen the script yet, it seems likely to revolve around a period in time in the comics when Gwen Stacy moved to London to study. This period took place shortly after the death of her father, which (spoilers) happened near the end of The Amazing Spider-Man.

The idea of giving Peter and Gwen a long-distance relationship, or even putting them "on a break" for part of the movie, probably appeals to filmmakers, who have to work around Emma Stone's always-busy schedule and who would like an opportunity to introduce Gwen Stacy into the picture sooner than later.

Of course, there's also the possibility that London is a great setting for the next film becuase the Tower Bridge could be a suitable stand-in for the Brooklyn Bridge, where Gwen Stacy is meant to fall to her death. The iconic bridge could create a nice place to shoot while the altered setting could distract from the fact that they already essentially bastardized that sequence in Sam Raimi's Spider-Man, using Mary Jane as the falling victim.

While a lot of films shoot in London (Disney, for example, has ample studio space there and has been rumored to be looking into shooting Ant-Manin the U.K.), Bleeding Cool gives away the ghost that some of the film will take place there because, according to their sources, the film will be doing exterior shooting in the readily-identifiable British capital. Says the report, "I managed to confirm that London Calling has indeed been planning for some production over here in the UK. How much? No idea. Yet. But it’s not studio stuff – or at least not just studio stuff. They’re planning to film out and about in the streets."