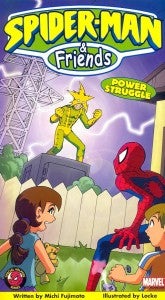 It seems as though Sony's The Amazing Spider-Man 2 might be playing the presence of Electro as its villain off of Uncle Ben's most enduring piece of advice to Peter Parker, as someone purporting to be from the studio approached moviegoers at the Mall of America and suggested a pair of "power-" centric subtitles for the upcoming spider-sequel.

"I saw an advance screening of Captain Phillips last week on Thursday at Mall of America," a reader wrote in to Comic Book Movie. "Before the showing there were Sony people there from their marketing arm asking for people's opinion on Amazing Spider Man 2 subtitles."

We have nothing to base this on, but we're guessing from that context that the third option might be The Amazing Spider-Man: Power Struggle, since "Power Struggle" has been the name of at least two published Spider-Man books featuring Electro that we can think of off the tops of our heads.

Amazing Spider-Man 2 To Get Subtitle?