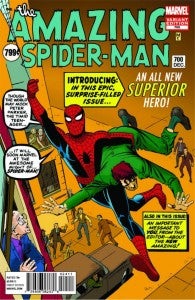 A rare variant cover for The Amazing Spider-Man #700 featuring art by Spider-Man co-creator Steve Ditko may be going for exorbitant prices on eBay right now, but expect those numbers to drop a little bit soon as more copies of the variant are set to make their way to comic shops who order big on second printings of the best-selling Spider-switcheroo.

Marvel Comics has confirmed for ComicBook.com that a limited number of copies of the Ditko variant--apparently an overprint from the first time around, not an additional printing of the variant--will be made available to retailers who meet ordering thresholds for the variant. They didn't specify what those thresholds are for the second printing, but the issue was originally a 1:200 variant, meaning that retailers had to order 200 copies of Amazing Spider-Man #700 in order to qualify for a copy of the Ditko variant.

The issue, of course, features the final (ha!) appearance of Peter Parker as Spider-Man. He's replaced by Otto Octavius, formerly known as Dr. Octopus, who takes a break from killing the hero for just long enough to have a epiphany that without Peter around, the world deserves a "superior" Spider-Man. A new series featuring that character launches on Wednesday.

Ditko is a private person who refuses almost every interview request and rarely openly addresses the controversy surrounding the creation of Spider-Man. His last work for Marvel Comics was in the mid-'90s, when he drew a Mighty Morphin' Power Rangers comic for the publisher. He effectively retired from mainstream comics in 1998, although much of his unpublished work has resurfaced in the years since and been released in a number of formats.