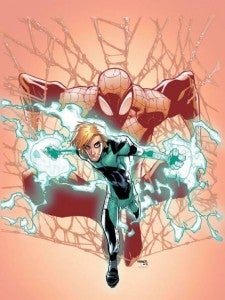 In an interview with USA Today in support of an upcoming miniseries featuring Spider-Man's onetime sidekick Alpha, I, Vampire writer Joshua Hale Fialkov appears to have revealed one of the key story elements of the final issue of The Amazing Spider-Man.

Series writer Dan Slott has been teasing for months that the status quo change in store for Spider-Man and Peter Parker would make him an Internet pariah after the release of the issue in December. There's been a great deal of speculation that Peter might die, and the publisher recently confirmed that the titular star of the upcoming Superior Spider-Man series for Marvel NOW! would not be Peter (there's a rumor that it could be Miguel O'Hara, the star of Spider-Man 2099).

While Alpha spins out of the events of The Amazing Spider-Man #700, the USA Today story confirms that Peter Parker is still alive, working at Horizon Labs, and providing periodic observation of Andy Maguire, formerly the superhero known as Alpha, whose powers were taken away by Peter after he failed to properly comprehend the whole "power and responsibility" thing.

Maguire moves to Pittsburgh in the miniseries, says the article, but still has to return to New York periodically to check in with Peter.

Fialkov told USA Today that besides losing his powers, his parents also split up and he's forced to leave his home in New York and move to Pittsburgh; all of this gives Maguire a feeling of loss and the sense that his life was once epic and now it's somehow diminished.

"He was a freak and then he became famous, and now he's infamous and powerless essentially as far as the world knows," said Fialkov. "He's that creepy kid who used to be on a sitcom when he was 5."