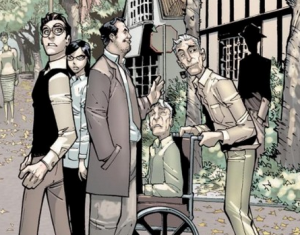 Warning: There are spoilers ahead for Amazing Spider-Man #698 through #700.

Just after the stunning twist of Amazing Spider-Man #698 was revealed yesterday, Marvel Comics released a preview of the series' 700th and final issue, which will be in stores on December 26.

In the preview, Peter Parker appears to talk with a number of deceased supporting characters from over the years, including his parents, his Uncle Ben, the Stacys and others. Obviously lack the context fans will have once they've read #699, but just from what we could see, here are some of the things we can't get out of our head after the fact.

This is the money question, of course. What the heck happens between #698 and #700? When he's told that it's not his time yet, Peter doesn't bat an eye. When it's suggested by Uncle Ben that he can finally "rest" and feel good about the whole power-responsibility ratio, it seems to help.

So is he actually dead, or is this a dream?

It doesn't seem to matter, in any case, since by the end of it, he seems headed back. That said, the faded colors and the sepia remind me quite a lot of The Adventures of Superman #500, in which Superman returned from the dead. Just saying.

Who's that mystery guest?

In the image above, we see a number of familiar faces--and one who isn't so much. Who is that person, and what role does he have to play?

Here's one thing we noticed, with the hat and the shadows and all that: he seems oddly familiar. It's been widely speculated that, even with Peter losing his role as Spider-Man in the near future, he'll probably be back, most likely with a new Amazing Spider-Man #1, in time for The Amazing Spider-Man 2 when it comes out in a couple of years. That may seem like an overly cynical point of view, except for two things:

1) That's what everyone predicted when Steve Rogers was shot, and it turned out they were all right.

2) If they really are tying this mystery man in with the movie plot, it seems unlikely we'll find out who he is right away. 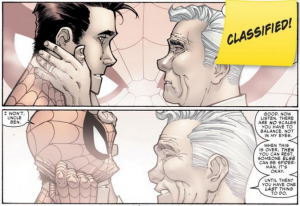 What did Uncle Ben tell him?

It seems likely that whatever it is Marvel censored here is either a spoiler for #699 or, more likely, key to the strategy Spider-Man and his amazing friends here are devising to defeat Doc Ock. What could it be?

Our money is on Ben telling him he can't let May down, hence Peter's response that "I won't." What does that mean? From context, it seems he may be giving Peter "permission" to kill if necessary.

Why is he wearing his Horizon jacket?

It seems notable that during this sequence, he seems to mature through various stages in his life, including awkward high school Peter, successful scientist Peter and even Spider-Man. But there's never a stop at the Daily Bugle, the job most fans associate with the character the most. The Horizon jacket seems an odd choice by comparison.

Of course, the look he sports on each page corresponds most closely with the person he's talking to, and the Horizon jacket ties into his parents and the fact that they see him as a success due to that career choice. Why does Uncle Ben see Peter as a success? Because as Spider-Man, he's always taken Ben's lessons to heart.

Is there anybody missing?

You tell us; I haven't read Spider-Man consistently since One More Day, and so as I look through this page I can scarcely identify anyone who isn't specifically identified. Are there any major Spidey characters lost in the last hundred issues or so, and missing from this sequence? Could they be the fedora-wearing stranger or are they really gone...and potentially not dead?