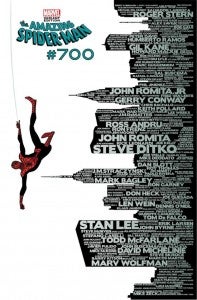 There's an article over at Newsarama, speculating that following the death of Doctor Octopus in an upcoming issue of The Amazing Spider-Man, Peter Parker might end up with the villain's metal arms grafted onto his body somehow, and that the change in appearance could be key to the "lasting changes" that Marvel and series writer Dan Slott have teased following The Amazing Spider-Man. Theirs is an interesting theory, albeit one that I don't find particularly exciting--it would remove one of the things that makes Spider-Man compelling, in that they rightly point out it would effectively sideline Peter Parker in favor of full-time superheroing. That might have a little bit of storytelling cache in it all by itself--now that Aunt May doesn't know who he is, for instance, it could be compelling to see her struggling with abandonment issues and wondering why Peter never comes around anymore--but it would be short-lived. In any event, thinking about what might happen in that issue actually led me to stop and think, would they actually kill Spider-Man in the final issue? And if they did, how would they handle it? And it seems like something that could happen. Much has been made of the fact that Spider-Man's sidekick Alpha has an origin that's suspiciously similar to Peter Parker's own, and while what we've seen so far is someone who's decidedly un-heroic, that may not be cause to completely dismiss the character. Could Alpha head up his own series following the events of The Amazing Spider-Man #700, leaving Peter dead and his legacy needing to be carried on? Obviously Alpha couldn't take on the Spider-Man identity without a change in the way his powers work, but the personality could work. After all, Peter was a little bit of a jerk himself in that first appearance, up until the death of his father figure shook his world to its core and gave him something concrete to fight for and live up to. And while that all happened in the span of one issue, imagine if it were to be written today, in the world of writing for the trade and "decompressed storytelling." Peter's origin might have played out over six or more issues, even if it was key to the premise of the book. Look at something like Superboy or Teen Titans, where DC's New 52 relaunch has taken for granted that the readers are with them for the long haul and took several issues to get the books to where they resembled what readers signed on for. Even Justice League didn't get the team together right away. Of course, the "Superior" teaser that was released by Marvel last week, and that Newsarama seems to believe has something to do with Spidey's future, could play into this as well. Superior is one of those words I could easily see being attached to Alpha, who believes himself to be the best superhero on the planet, even without any actual evidence to support that position. What might be more likely than a death, though, is for a power change. Spider-Man's powers have changed a number of times over the years, between sprouting multiple arms, and Cosmic Spider-Man, the organic webshooters and all the stuff that came with being retconned as the spider totem. Adding Doc Ock's arms could be one version of that, but what if Spidey and Alpha were somehow swapped? In the wake of Avengers vs. X-Men, a character with power on Alpha's level should be considered a threat in the Marvel Universe and viewed with considerable suspicion and maybe even outright fear and disdain. To somehow change out his power set with Spider-Man's would allow for a "new" Spider-Man as Alpha has to deal with his new powers and some new challenges for Peter, as he deals not only with a new identity and new power set but also a world that hates and fears him EVEN MORE than he's already used to with J. Jonah Jameson informing public opinion. That could also clear the way for a tongue-in-cheek title like "The Superior Spider-Man," once again playing off the idea that Alpha is a bit of an egomaniac and that Spidey is a character who, historically, has had titles that attach those Marvel-style adjectives to his name. It could also allude to Peter's status as a near-god following the power change. A mere power change, though, seems hard to swallow, given all the tweeting and talking that writer Dan Slott has been doing about how people were going to be upset with his change and he'll have to hide under a rock and not grant any interviews. Could they actually kill Peter, and replace him as Spider-Man in the 616 universe? It seems crazy, but it could be true.