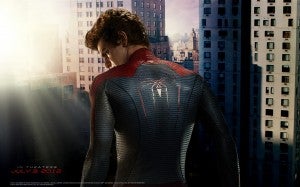 The commerce blog Licensing.biz reports that the producers of The Amazing Spider-Man have come to an agreement with Wal-Mart that will allow the big-box retailer to offer shoppers "the ultimate Spider-Man experience." And it's nothing to do with the comic book and animated series Ultimate Spider-Man; rather, beginning on Friday, Wal-Mart stores will be screening an exclusive scene from the upcoming release The Amazing Spider-Man on screens around their store at designated times during the day.

“We’re always looking for ways to bring innovative technology, exclusive content and interactive events to our customers,” Licensing.biz quoted Seong Ohm, senior vice president and general merchandise manager for entertainment, Walmart US, as saying. “Movie fans can rest assured that Wal-Mart will have the broadest assortment of the Super Hero products they want – from special-edition movie releases to toys, food and apparel.”

They'll also roll out a new augmented reality app that can be used in-store to unlock Spider-Man-related goodies on your cell phone, not unlike what they did with The Avengers, and a "collectible reprint" of 1963's The Amazing Spider-Man #6, featuring the first-ever appearance of the movie's villain,  The Lizard. Some stores will hos "The Amazing Spider-Man Secrets Unmasked Tour," where they'll get a demo of the upcoming movie tie-in video game and a Spider-Man Bonkazonks truck from Hasbro.

According to Bleeding Cool, the scene being screened at Wal-Mart will also be available for sale at a price point of only $2.96, although Licensing.biz didn't report that part, and if true it's likely to run out of stock shortly after they are reported to go on sale Thursday night/Friday morning at midnight.

Amazing Spider-Man Comes to DVD at Wal-Mart This Week