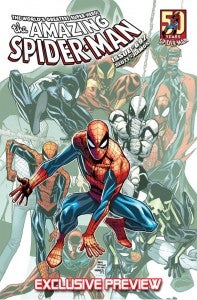 Following on the heels of this morning's announcement that Spider-Man will get a sidekick beginning with Amazing Spider-Man #692 in August, Marvel Comics has released a preview of the issue, featuring the first appearance of the young hero to be known as Alpha.

While most readers are speculating that the character won't actually be a long-term addition to the Spider-Man supporting cast, his first appearance is obviously a big deal for Marvel, and likely part of the build-up to "seismic" changes planned for Spidey's fiftieth anniversary and the 700th issue of The Amazing Spider-Man.

Check out the official description below, along with preview pages for the issue, which will be on stands August 22.

Fans across the globe have been asking, “Who Is Alpha” and this August, in Amazing Spider-Man #692, they’ll find out! Marvel is celebrating Spider-Man’s 50th anniversary in style as the blockbuster creative team of Dan Slott and Humberto Ramos give Peter Parker his very own….sidekick?! When he’s not working with the Avengers of the Future Foundation, Spider-Man has been saving the Marvel Universe on his own for fifty years! But now, with his anniversary right around the corner, that’s all about to change!

This special event, could only be told in this oversized issue celebrating the values that made Spider-Man the world’s greatest super hero for the past five decades and many more to come. And with special variant covers by superstar artist Marcos Martin, depicting Spider-Man through the years, no fan can miss out on this! Get ready for a story about power and responsibility like you’ve never seen before in Amazing Spider-Man #692, swinging into comic shops everywhere, the Marvel Comics app and the Marvel Digital Comics Shop this August.

Pencils and Cover by HUMBERTO RAMOS

Amazing Spider-Man Preview: Who is Alpha?

Dead by Daylight Update Nerfs One of the Game's Best Perks

Gears of War Studio Begins Staffing Up for Next Big Game