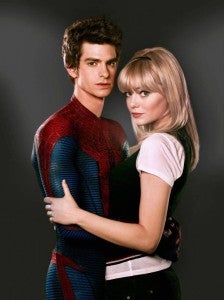 New promotional images are online for Sony's upcoming holiday-weekend release The Amazing Spider-Man, which reboots the character's high-grossing film franchise with Andrew Garfield in the lead role and a star-studded supporting cast including Emma Stone as Gwen Stacy, Sally Field as Aunt May and Martin Sheen as Uncle Ben.

The images primarily focus on Spider-Man's costume, giving fans a good look at what Andrew Garfield will likely look like on posters and other merchandise. There's another shot that's listed at Comic Book Movie as a film still, which features Peter and Gwen cozying up to each other while he's still got his mask on, and another of the pair together that's likely another promotional shot (seen at left), as it's been previously released on the cover of Comic-Con magazine and on the cover of the Amazing Spider-Man movie tie-in comic out last week.

Emma Stone Comedy Easy A Sequel in the Works