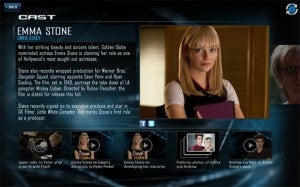 Sony Pictures Home Entertainment announced today the launch of their second screen app for The Amazing Spider-Man, available on the iOS and Google Play marketplaces to accompany the November 9 release of the film on Blu-ray.

The app, which is exclusive to the iPad and Sony tablets, will sync trivia and other features with the Blu-ray, allowing fans to enjoy special features not included on the disc itself as well as engaging the app with their social media accounts through Facebook and Twitter.

Check out the full description below.

The Second Screen App, which syncs only with the Blu-ray Disc, offers an additional movie-watching experience, giving users behind-the-scenes access into the world of Spider-Man as the film plays. Additionally, the App will unlock new content each week with all content available by the November 9th release of The Amazing Spider-Man on Blu-ray.

By accessing the Second Screen App, users can engage with key elements from the film while watching it on Blu-ray. The App includes two interactive modes – Timeline and Production – both featuring extensive content from the set such as interviews with the cast and filmmakers, featurettes on the making of the film, behind-the-scenes photos, storyboards, concept art, pre-visualization sequences, stunt rehearsals, trivia, factoids and more.

- In Timeline Mode, the App syncs with the Blu-ray Disc, allowing scene-specific trivia, featurettes, storyboards, interviews, and other content to scroll across your tablet in time with the movie. - In Production Mode, users can explore even more content that goes deeper into the making of the film by diving into the various areas of the production process including Filmmakers, Story, Design, Cast, Location and Stunts, among others. And when the App syncs with the Blu-ray Disc through a connected player, users can “sling” select content from the Sony Tablet or iPad to the television screen to watch it in full HD, for a greater viewing experience.

The Amazing Spider-Man Second Screen App is available for free from Google Play on the Sony Tablet or at the App Store on iPad.