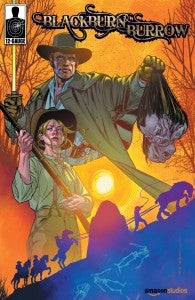 "Blackburn Burrow, a story set in Civil War America where supernatural horrors are infesting a small Appalachian town in Northern Georgia," says a press release from the company sent earlier today. "Blackburn Burrow first came to Amazon Studios in the form of a feature film screenplay from writer Jay Levy. Community feedback, gathered from Amazon Studios’ crowdsourcing model, triggered the idea for the popular project to be adapted into a digital comic that would be shared with audiences for feedback and tested for viability as a major motion picture."

That's an increasingly popular philosophy, of course, with filmmakers taking projects to places like Top Cow and Legendary Pictures starting up its own comic book arm. Wes Craven and Steve Niles, both bona fide successes, recently announced a similar initiative. 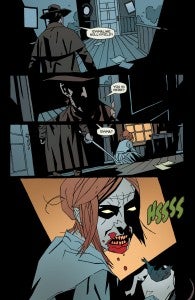 Published by 12 Gauge Studios, who have worked with The Walking Dead's Gale Anne Hurd on her comic Anti, can be read on the Amazon Studios website in a custom reader provided by GraphicLy or on the Kindle Fire, if you're into that kind of thing. It's written by Shinku's Ron Marz and Matthew Dow Smith of Doctor Who and October Girl fame.

“This is a very exciting new venture for Amazon Studios. Beyond entertaining lots of comic fans, we see value in digital comics as a new way to test screenplays and learn more about fan engagement,” said Roy Price, Director of Amazon Studios, in a release. “The 12 Gauge team has done beautiful work on the Blackburn Burrow digital comic and we are thrilled to share it with audiences to see how they react to the story of Blackburn Burrow.”

Amazon Gets Into Comic Book Business