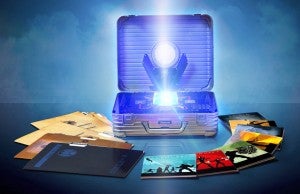 Customers who bought the Marvel Cinematic Universe: Phase One box set, which was recently delayed, from Amazon and who didn't cancel their order when the delay was announced will receive a free Blu-ray copy of The Avengers to tide them over until the set's revised release date rolls around this spring.

It was widely believed that Marvel had to delay the box as a result of pending litigation from the manufacturer of the briefcase Samuel L. Jackson uses in the film. The original box set was a small-scale replica of the case, and the German company that sells them claims that Marvel did not obtain the rights to reproduce and redistribute their product. While Amazon's note to customers doesn't explicitly confirm that theory, it certainly seems to implicitly suggest that there's something to it:

To show our appreciation for your understanding, we are providing you with a promo code to receive a free copy of Marvel's The Avengers (Two-Disc Blu-ray/DVD Combo in Blu-ray Packaging). To be eligible, you must have placed your order between June 1, 2012 and August 28, 2012. Any cancelled orders are not eligible to receive the free copy. Codes must be redeemed by October 15, 2012.

It's also rumored that the delay will result in additional content being added to the discs themselves, so that fans who get the box set when it comes in the spring will have even more to look forward to, including probably early looks at Iron Man 3 and Thor: The Dark World.

Marvel's The Avengers comes out on DVD and Blu-ray next week.