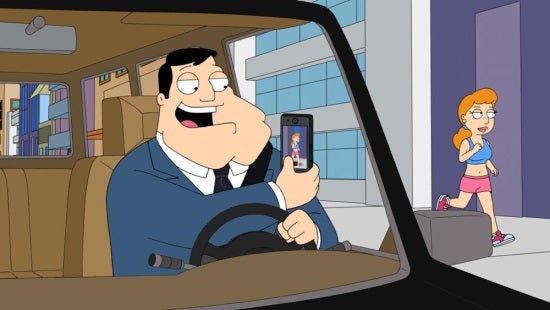 A new episode of American Dad, "Rubberneckers," airs on Fox tonight. In "Rubberneckers," Stan's co-workers at the CIA teach him about "rubbernecking," the art of checking out other women on the sly, away from the gaze of their wives. But when Stan causes a massive accident in an attempt to take a picture of an attractive jogger, he's interviewed by an intimidating insurance inspector (guest voice Terry Crews) who may rat out Stan to Francine. Meanwhile, Roger and Klaus spill wine on the Smiths' brand new couch, and vow never to tell the other family members by sitting on the stained spot for the rest of their lives. The voice cast includes Seth MacFarlane as Stan Smith and Roger the Alien; Wendy Schaal as Francine Smith; Rachael MacFarlane as Hayley; Scott Grimes as Steve; Dee Bradley Baker as Klaus; and Jeff Fischer as Jeff. Guest voices include Terry Crews as Heinrich Brown. American Dad, "Rubberneckers," airs Sunday, April 27 at 7:30 PM ET on Fox.