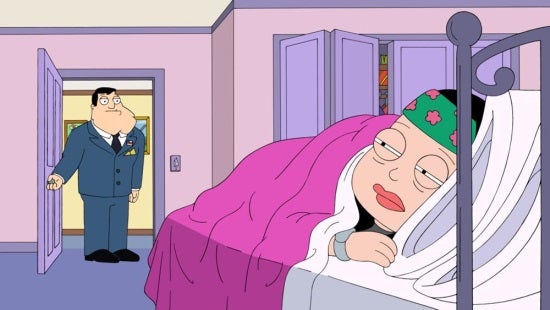 A brand new episode of American Dad, "She Swill Survive," will air tonight on Fox. In "She Swill Survive," Stan fears that Hayley has no life skills, so he forces her to take a job as a bartender in Roger's attic haunt. However, when Bullock (guest voice Patrick Stewart) becomes Hayley's best customer, Stan realizes that he can use his daughter's knowledge to get ahead at work. The voice cast includes Seth MacFarlane as Stan Smith and Roger the Alien; Wendy Schaal as Francine Smith; Rachael MacFarlane as Hayley; Scott Grimes as Steve; Dee Bradley Baker as Klaus; and Jeff Fischer as Jeff. American Dad, "She Swill Survive," airs Sunday, April 13 at 7:30 p.m. ET on Fox.