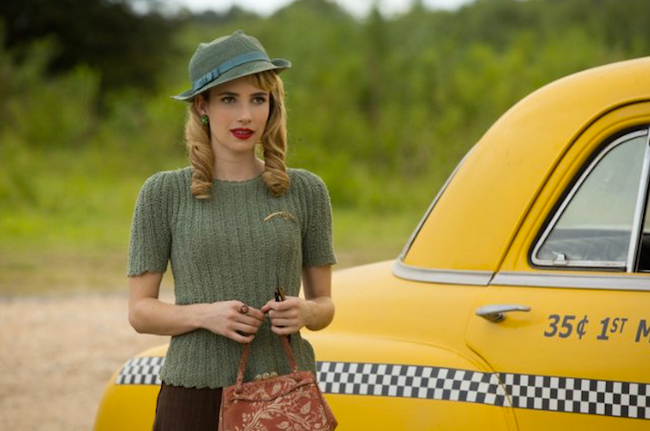 This episode of American Horror Story: Freak Show, “Edward Mordrake: Part 1” will be followed up with “Part 2” next week.

“Part 1” opens during a routine tour of the American Morbidity Museum, where guests are treated to the likes of skeletons of conjoined twins and other freaks’ relics. The tour guide then meets with a “Dr. Mansfield” of Harvard (Denis O’Hare) and his assistant (Emma Roberts), who are trying to sell a preserved “baby sasquatch.”

Another representative of the Museum points out that not only has Dr. Mansfield lied about his Harvard degrees, but also, he’s broken the law by presenting a fetal goat mixed with a baby cat as medical evidence. They decide not to follow through with any prosecution, however, as the Museum is hurting for new attractions. If Dr. Mansfield and his assistant can bring them something strange but authentic, they’ll be paid handsomely, prompting the two to head towards Florida.

Fast forward to West Palm beach on Halloween, where a small town is crowded with trick-or-treaters, since the local town (terrorized by Twisty) has a strict curfew. Two mothers are discussing the local crimes, when one of their daughters sees Twisty on the street. She tries to tell her mother that she saw a scary clown, but she doesn’t believe her. It’s Halloween, and she finds clowns delightful.

Next we see Ethel (Kathy Bates) visiting a discreet doctor who has bad news. She has tested positive for cirrhosis of the liver and has anywhere from six months to one year left to live. He suggests she keep meat-eating to a minimum and avoid alcohol entirely, which will only exacerbate the process. Ethel cries, not because she is dying, but because he is the only doctor who has ever treated her with respect.

Back at the circus, the freak family is having one of their typical, rowdy parties, where everyone’s indulging except for Bette and Dot (Sarah Paulson). Jimmy (Evan Peters) walks in, fresh from digging Meep’s grave, and upon realizing how upset he is, Dot scolds everyone for not respecting Meep’s death. She suggests they all work extra hard in Meep’s honor, before she learns that no freaks ever perform on Halloween.

Ethel tells the superstitious tale of Edward Mordrake (Wes Bentley), a mid-1800s aristocrat who wrote beautiful music and poetry, but he was haunted by a face on the back of his head. The face spoke to Edward, and only Edward could hear the voice, which spoke things “only heard in Hell.” He tried to kill the face but could not. He eventually became a mute and was committed to an asylum, until he broke out and joined a freak show.

At the circus, he’d showcase his artistic talents and then show the audience his second face. The face never stopped whispering to him and telling him to do evil things, until eventually on Halloween, Edward killed every freak in the circus, before hanging himself. When he was found, the second face was smiling. Now, freaks never perform on Halloween. Legend says that if they do, the ghost of Edward Mordrake will appear and will not return to Hell without someone new.

At the Mott’s, Gloria (Frances Conroy) sets up an elaborate dinner table to please Dandy (Finn Wittrock). He’s far from impressed, of course, and particularly hates the Halloween costume made for him by their maid, Dora. Dandy begins to make his own costume: a clown.

Meanwhile, the freaks are lowering Meep’s coffin into the ground and paying their last respects. They pour one out for Meep, after they each throw a severed chicken head into the grave. A taxi pulls up soon after, dropping off Emma Robert’s character from the beginning of the episode, who claims that she is a fortune teller named Esmeralda in need of a job.

The show next cuts to Bette and Dot’s dream/nightmare, in which the two are undergoing surgery to kill Dot and make Bette “normal.” When they wake up, Bette admits that she believes it would be completely worth it to kill Dot. It would be better for one of them to have a chance at happiness than for both to be miserable. 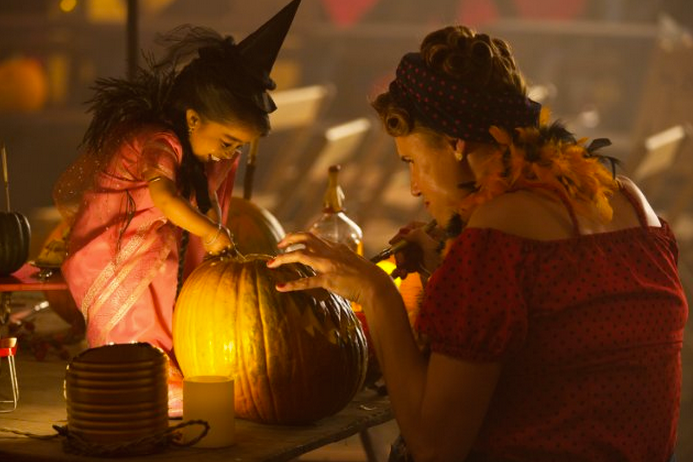 Elsa (Jessica Lange) puts Esmeralda to the test, asking her to read her future. Esmeralda looks around the room, gathers some information about Elsa, and feeds Elsa the image of her perfect future. Elsa will sing, it will be heartbreaking, and she will get thunderous applause. Elsa falls for it and hires Esmeralda on the spot.

Meanwhile, Desiree (Angela Bassett) and Dell (Michael Chiklis) are starting to fool around, when Dell has some performance issues. This starts an argument, which ends when Dell shoves Desiree against the wall. She makes fun of him and says, “get your paws off me, or you will never see me again.” He storms outside angrily, running into Ethel, who’s been chilling with a drink nearby.

The two have a chat over hooch, reminiscing about their relationship. He admits that he never loved her but that he does regret not being there to raise Jimmy. She reminds Dell that Jimmy can never know who his real father is, and then she tells Dell that she is dying. She asks Dell to be a role model for Jimmy and to push him out into the world.

Now, it’s Halloween Night, and we see through the eyes of a clown mask, as someone walks down a set of stairs. We’re seeing the view of Dandy, who tries to scare Dora by holding up a knife. She mocks him, saying she’s not afraid of him. She tells him that she knows all about the animals he’s killed but that she thinks he doesn’t have the guts to kill her. He doesn’t.

At the camp, Esmeralda calls Denis O’Hare’s character to tell her that she’s got the job, but she doesn’t want it. The freaks freak her out, especially Bette and Dot. When he learns about the twins, he’s determined to kill them and sell their body to the Museum. The call ends when he receives a Viking God gentleman visitor, who removes his pants to reveal another undisclosed surprise from “Dr. Mansfield.”

The policeman who approaches Esmeralda and Jimmy just wants them to get back before the curfew. Somewhere else in town, we revisit the little girl from the beginning of the episode who saw Twisty. The clown has broken into her house and kidnapped her older brother.

Back at the show, Bette and Dot want to rehearse, despite the carnies’ protests and fears about Edward Mordrake. Elsa, inspired by her good fortune, insists on rehearsing. A power struggle ensues between Elsa and Bette over who is the show’s real star. Elsa threatens to abandon them in a swamp, performs a grandiose number, and summons Edward Mordrake.

Later that night, Ethel is visited by Mordrake, who speaks to her exceptionally courteously. It does not matter who summoned him, but now he must take someone – a true freak – back with him to Hell. He asks Ethel a series of questions, mostly about her past, warning her that if she lies, It (his second face) will know.

We learn that Ethel was once a proud freak who considered herself “in on the joke.” She met Dell and fell in love, and then under his guidance, decided to pursue more cultured entertainment. When people laughed and boo’d at the bearded lady reciting Shakespeare, she knew that she was no longer part of the joke, she simply was the joke.

Mordrake inquires further. He believes she has an even darker secret.

Ethel reveals that she and Dell were completely penniless when she was pregnant with Jimmy. They sold tickets to watch her live “freak birth,” and as soon as Jimmy popped out, they charged people to hold the monster people. Jimmy has been exploited since the moment of his birth. After recalling the story, Ethel says she is ready to go to Hell because she feels she deserves it.

Mordrake’s second face chances his mind about Ethel, and he disappears.

Lastly, we find Dandy in his new clown costume at Twisty’s trailer. He taunts the captives until Twisty himself shows up with the body of the little girl’s brother from town. Dandy exclaims “more fun,” and the episode ends with a “to be continued.”