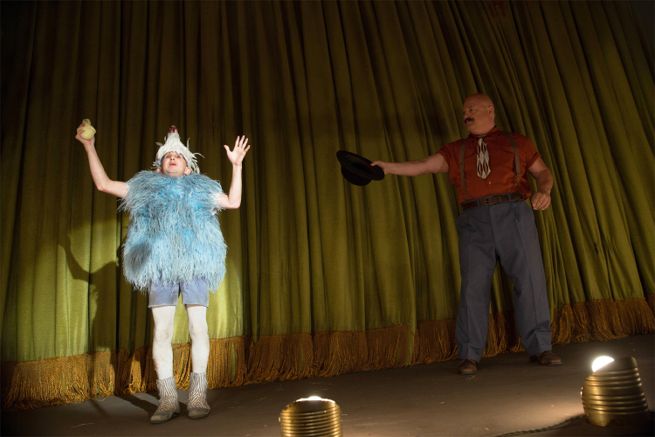 In the "Massacres And Matinees" episode of American Horror Story: Freak Show, the police show up at the Freak Show looking for their missing detective. Elsa says they can't look around, but she can offer them a ticket to the show. The detectives say there isn't going to be a show tonight that they are imposing a curfew. When Bette and Dot walk in, the cops take an interest since they were involved in a murder scene, Elsa says the other detective talked to them and said the murder fit the M.O. of the other crimes.

Everyone at the Freak Show is listening to loud music, and Jimmy (Lobster Boy) screams for them to shut up. Then, Jimmy and the others dig up the detective's grave in order to burn the body parts. Jimmy says that people have to get to know them so they know they're just regular people and not freaks.

Gloria Mott and her son Dandy are having dinner. They are at opposite ends of the table, and Dandy is using his thumb to make noise with a fork. Gloria rings a bell, and a maid brings out a dish of escargot to Gloria and Dandy. Dandy drinks cognac out of a crystal baby bottle. Gloria says she wants a grandbaby, but Dandy says he just wants to be a thespian. The maid says that she found some parts behind the tool shed and that people have been disappearing all over town. Gloria insists that Dandy had nothing to do with that, he's just bored.

Back at the Freak Show, Ethel sees someone drive up. She sighs and says it's someone she used to know. A strong man named Dell and his wife Desiree are applying for a job at the Freak Show. In a flashback to Chicago 3 weeks ago, Dell comes across two men waiting outside a tent. When he enters the tent, he finds a man having sex with Desiree, and he breaks the man's neck.

Desiree opens up her shirt and reveals that she has three breasts. Desiree reveals she's a full blown hermaphrodite. Elsa says the position is filled and she couldn't afford them anyway. Dell says to put a contract in front of them, and they'll take it. Elsa asks the strong man to show her his hands. Elsa says he has strong hands, and she asks if he barks.

Twisty is walking along the side of the road, and Gloria stops and asks if he does parties. She says it's for her son, who is sad.

Dandy is at the Freak show talking to Jimmy. Dandy says that he wants to join the Freak Show. He claims that it is the perfect place for him. Jimmy tells Dandy that he wouldn't last one day there. Dandy insists that he's one of them and asks Jimmy to give him a chance. Jimmy says he would give the world for normal hands like Dandy has and tells him to go home to his mansion.

Dandy sits in his car, crying and screaming, "I hate you." When Gloria hears Dandy return home, she runs to tell him that she has a surprise for him. Gloria shows Dandy that she got him a clown. It's Twisty. Dandy slowly walks up to Twisty.

Back at the Freak Show, Ethel is watching Desiree come out of Dell's trailer to go take a shower in the tents. Ethel goes in to see Dell. Dell tells Ethel that she looks good. Ethel tells Dell that whatever his story is that he needs to stay away from Jimmy. In a flashback, Ethel remembers Dell about to kill baby Jimmy, and her telling him to get away.

Bette is singing. Elsa tells Bette that she can't sing. Jimmy asks what about Dot. Bette insists that Dot doesn't have any talent, but Jimmy wants to hear Dot anyway. Dot sings, and she has a beautiful voice. Dell says that will go over real well tomorrow, but Elsa points out that there is a curfew. Dell says they will have a matinee, but Elsa says that people don't go to see freaks during the day.

Desiree tells Dell to listen to Elsa that she's his boss now. Jimmy goes over to tell Dell to calm down, and Dell storms out.

Dandy is doing a puppet show for Twisty the clown. Dandy says that he likes real puppets like Twisty. He says, "Amuse me clown. I'm sure mother has paid you handsomely." Dandy walks around Twisty and looks at a bag he is carrying. Dandy says Twisty will have to earn his keep and tells him to find a toy and show what kind of clown he is. While Twisty is busy looking at toys, Dandy goes and looks in Twisty's bag and his eyes get all big. Twisty hits Dandy in the back of his head and takes his bag back and runs off.

Jimmy shows up at the diner with a group of his Freak Show friends. The waitress asks what he wants. Jimmy says this is a diner, and they want to be served. Jimmy and his friends are eating, and a lady asks if there's any place else that they can go, because they are upsetting her daughter. Dell walks into the diner and tells them that they need to eat at the camp. Dell yells at Jimmy that if they give these folks a free show no one is going to want to buy a ticket. Dell takes Jimmy outside and beats him up.

Back at Twisty's hideout, the young woman and boy are trying to escape from their cage. They hear Twisty coming back. Dandy is following behind him. Twisty unlocks their cage and goes inside with them. Twisty reaches in his pocket and pulls out a toy robot. He winds it up and puts it down on the ground so it can walk toward the boy. Twisty pulls a bloody head out of the bag, and the young woman hits Twisty with a board and starts to run off. She runs into Dandy. And Dandy grabs her and brings her back to Twisty.

Jimmy goes barging into Elsa's tent. Jimmy says that Dell can't stay there that he's out putting matinee posters up all over town after she asked him not to. Elsa says that she reconsidered. Elsa says they need a strong man to protect them. Jimmy shows her the cop's badge and says she's already got a strong man.

Dell is leading the Freak Show, and he introduces Bette and Dot. Dot sings and the crowd starts dancing. The crowd applauds wildly after the song, but Elsa doesn't look happy.

The police show up at the Freak Show with a search warrant. They say they got a tip about Dell and need to search his trailer. Jimmy is all smiles, because he planted the detective's badge in Dell's trailer. However the cops don't find anything, and they start searching the rest of the Freak Show. Dell looks at Jimmy, and lets it be known that he moved the badge that Jimmy planted. The cops find the detective's badge in Meep's trailer.

They put the Meep in a jail cell with a bunch of big tough guys. They threaten to rip the Meep's fingers off one by one.

Elsa wakes up Bette, and she says that she came to congratulate her on her performance. Elsa says anyone can see that she's the star. Elsa says Dot wants what Bette has, but she must not allow it. She slides a knife under Bette's mattress.