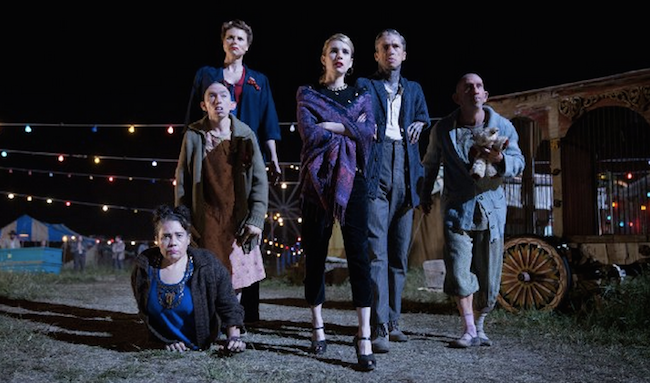 Dandy (Finn Wittrock) seeks to know his future in the opening of this episode of American Horror Story: Freak Show, so he seeks out the local clairvoyant, Maggie (Emma Roberts). He’s worried what will happen to him now that he’s killed his mother, who kept him out of trouble his whole life. In a brief, disturbing flashback, we see Dandy kill an Avon saleswoman, behead her, and then sew her head onto Gloria’s body, imitating Dot and Bette. Dandy leaves Maggie thrilled by her kind words, fascinated by her “powers.”

Nearby, a very drunk Jimmy (Evan Peters) is seductively feeding his new plaything, Ima (Chrissy Metz), while the other freaks search for the twins. He sees Dandy leaving the camp and runs after him, accusing him of murder as the man behind the other clown mask. Jimmy even throws a drunken punch and falls to the ground. Dandy tells Jimmy that, since Jimmy stole the twins from him, he will leave him on the ground for now, with plans to absolutely destroy him later.

Elsa (Jessica Lange) and Stanley (Denis O’Hare) find Dot and Bette (Sarah Paulson) in a hotel where Ethel had hidden them, telling the twins that Ethel is dead and someone is hunting freaks. Elsa tells them that she’s contacted the surgeon to separate them, who’s on his way.

Desiree (Angela Bassett) and Maggie run into a new character played by Malcolm-Jamal Warner when he enters the outskirts of camp, who turns out to be Desiree’s secret man. They next run into Jimmy having sex with Ima, disrupting them and starting an argument. Maggie tells Ima that she is nothing to Jimmy, who is grieving drunk.

In the next scene, Jimmy is working his part-time job of servicing the local ladies, but he’s still drunk and keeps “missing.” He imagines Ethel (Kathy Bates) in their living room, who says she’s rolling over in her grave and wants him to move on, before he is thrown out by the women. Moments later, Dandy knocks on their door, saying his car broke down and asking to use their phone.

Elsa and Stanley bring Dot and Bette to the shed nearby. In a brief flashback, Stanley explains that once the girl’s are separated, he and Elsa can go to California and the twins can live their own lives, out of Elsa’s hair. He got in touch with “the doctor” through a mutual acquaintance. Saying the doctor would arrive any minute, Stanley leaves.

Back to the housewives and Dandy, who are missing when the man of the house comes home. He walks into their pool room to find the water completely red, with each of the women dead and floating in the water. Dandy is shown back at home re-filling his blood pool, when Regina (Gabourey Sidibe) enters to say she’s called the police over the disappearance of her mother.

Dandy simply tells her that he killed her mother and explains his current blood-bathing practice, locking her into the room. He suggests they take a bath together like when they were little. He declares himself a god chosen to walk among men, tells Regina he doesn’t want to kill her, and demands she get in the tub. She resists and he allows her to leave.

Dot and Bette talk about the surgery in the shed. Bette fears that the surgery will kill one of them, and while Dot admits that she sincerely does not want Bette to die, she still thinks they deserve a shot at separate lives. Bette reminisces about the powerful relationship that they have, admitting that she does not think she could survive without Dot. Bette declares that, if the choice is necessary, she wants to freely give her life, so that Dot can have hers.

Dell (Michael Chiklis) is shown drinking while trying to write letters to loved ones, which he repeatedly throws away. In a short flashback, he walks away from the camp but is followed by Stanley, who won’t let him leave. Stanley mocks Dell, saying that while Dell shouldn’t head out half-cocked, he personally is never half-cocked. Then – Stanley unzips his fly and pulls himself out. Dell looks down at it, and calls him a freak. Stanley wants him to touch it, proposing that they share their secret shame.

Back to his tent, where Dell is writing letters. We see excerpts of the writing that imply he is writing suicide notes. He is about to hang himself when he sees Ethel watching, who urges him on. He says he can’t take the shame any longer. They discuss the paradox of the strongman being the “weakest” freak, before he tightens the noose around his neck and jumps. Desiree cuts him down just before he dies.

Next, Stanley is shown coaching the “doctor,” who’s just one of his boyfriends, on what to say to the twins before he euthanizes them.

Regina returns to Dandy’s home with a police officer, and Dandy welcomes him inside freely. The officer suggests that if Gloria just made an appearance, she would be putting Regina’s accusations to rest. Dandy begins a lengthy speech in which he explains that thanks to the enormous Mott empire, he has the money power to get away with anything he wants besides the fact that he claims to have literally seen the face of God. The police officer puts his hand on his gun and suggests that Dandy stop talking. Dandy offers the officer one million dollars in cash for him to kill Regina, which he does, immediately.

At the circus that night, Jimmy is still drinking. He finds Dot and Bette in his tent, who have decided not to get separated. Dot tells Jimmy that he never has to be alone; she is in love with him and wants the three of them to be together, “three souls.” He says that cares about them both but cannot be with them, because he loves someone else. When the twins leave, crushed, he picks up his bottle and throws it at the wall.

Moments later, the officer bought off by Dandy appears at the camp, arresting Jimmy for killing the housewives whose blood Dandy bathed in earlier.