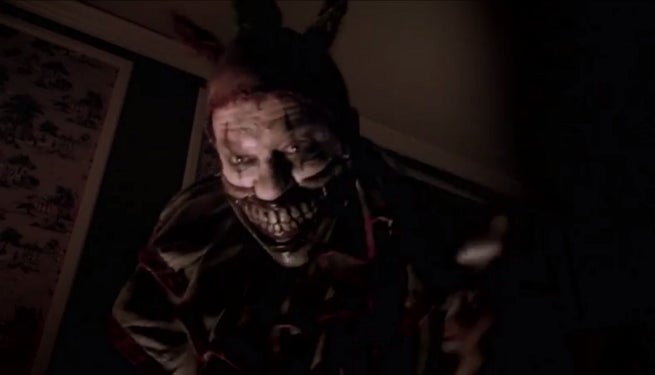 The American Horror Story: Freak Show premiere kicks off with Siamese twins Bette and Dot Tattler telling their story of how they joined Elsa's Freak Show. In Jupiter, Florida in 1952, a milk man is delivering milk. When the milk man calls out for Ms. Tattler, he doesn't get an answer. He goes inside and finds Ms. Tattlers' bloody body on the floor. He starts going through the house with a rolling pin as his only weapon. He opens a door and reacts with fright.

Elsa approaches a candy striper working at the hospital. They strike up a conversation about the Siamese twins. Then, the next thing we know Elsa is wearing the candy striper's uniform and entering Bette and Dot's room. Elsa pulls back a curtain to see Bette and Dot. As she makes a noise moving the curtains, Bette and Dot wake up and say, "I don't know you." Elsa approaches with two balloons and says, "How fortunate of you to have a sister."

Elsa is talking to Bette and Dot, while Dot is wondering why she is being so nice to them. Elsa gives Bette and Dot some magazines to read. Elsa asks if they've ever had a boyfriend. Elsa points out that they have two hearts but only one reproductive system.

Elsa is flipping through a scrap book while getting a cup of coffee at a diner. She notices a young man talking to one of the waitresses. It's Jimmy Darling, also known as Lobster Boy. Elsa gets mad at Lobster Boy and accuses him of risking everything they are building for some floozy.

In a flashback, Elsa is doing laundry beside some circus tents. A man tells her that they are going to have vacate the premises. The man says that his wife doesn't like having freaks in their field, but Elsa invites him inside.

A bunch of women are gossiping. A woman comes out of a back room and informs another woman that it is her turn. She asks where she found it, and she says one of those road side attractions. The woman walks back and there is Lobster boy. The woman pulls her dress up, as Lobster Boy demonstrates one of the uses for his long claw-like hands.

Back at the hospital, Bette and Dot try to tell Elsa about the man that strangled her mother. Elsa says that they need to try harder to get their stories straight before the cops show up.

There are various scenes of Twisty the clown attacking people in their homes, while others listen to the reports on the radio. Twisty also kidnaps a young boy. There is an overgrown house in the woods and the young woman from earlier and boy that Twisty kidnapped are in cages. The younger woman offers food to the boy. Twisty returns and shows them a windup clown toy.

The young woman tells Twisty that he's very talented and asks to be released so that they can tell the world. Twisty starts rattling something and frightens the woman. Then, he makes a balloon animal and pops it. As the young woman and boy scream in terror, Twisty throws balls at them and rattles their cages.

Bette and Dot are packing up their bags, when Elsa shows up. Elsa says that the police are after them, and they would both get the electric chair or be separated. In a flashback, Bette is asking to go to the movies, but the mother refuses and slaps Bette. Bette stabs their mother to death. Later that night, Dot stabs Bette while she is sleeping.

Elsa recruits the twins to join her freak show. Bette is happy at the freak show, but Dot hates it. Ethel, the bearded lady, brings them food, but Dot won't let Bette eat. Ethel says that Elsa rescued her from the drunk tank and put her back on the stage where she belonged. Dot says they are nobody's trained monkey, but Ethel says this show is as good as it gets for people like them.

The candy striper insists they are monsters, but Elsa says the monsters are outside. Elsa insists her monsters are providing entertainment.

Lobster Boy is talking to his mother Ethel. Lobster Boy wants to leave, but Ethel insists this is their life. Lobster Boy says he wants to have a normal life, but his mother insists he go talk to the twins and help them eat.

Gloria Mott and her son Dandy come to see the freak show. Elsa comes out riding on a rocket and singing "Life on Mars." After the show, Gloria and Dandy want to buy Bette and Dot. They offer $15,000 for Bette and Dot, but Bette and Dot refuse and call the freak show their home. Gloria is furious and tells Elsa that her singing was the worst part of the performance.

Ethel thanks Elsa for bringing the Siamese twins there for all of them. Elsa says she brought the twins there for her, so that people would come to hear her sing, and she would become a star. Ethel reassures Elsa that she's going to become a star. After Ethel leaves, Elsa starts playing music. She pulls up her dress to reveal that she has two wooden legs.