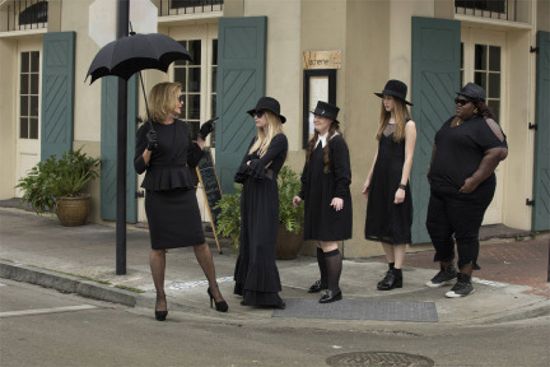 American Horror Story: Coven Season 3 premiered last week on FX, and FX has just released a new Inside The Coven video. In the video, director Alfonso Gomez-Rejon and director of photography Michael Goi discuss how the visual aesthetics in the premiere episode establish the world inside the latest American Horror Story. For example, in regards to the Salem sequences, Goi explains, "We embraced the silent movie aspects to make it feel like a cohesive whole, so we were using hand-cranked cameras, real black-and-white film, all those devices to make it work artistically." Check out the full, over six minute video of director's commentary below. American Horror Story: Coven tells the secret history of witches and witchcraft in America. Over 300 years have passed since the turbulent days of the Salem witch trials and those who managed to escape are now facing extinction. Mysterious attacks have been escalating against their kind and young girls are being sent away to a special school in New Orleans to learn how to protect themselves. Wrapped up in the turmoil is new arrival, Zoe (Taissa Farmiga), who is harboring a terrifying secret of her own. Alarmed by the recent aggression, Fiona (Jessica Lange), the long-absent Supreme, sweeps back into town, determined to protect the Coven and hell-bent on decimating anyone who gets in her way. American Horror Story: Coven airs on Wednesday nights at 10 PM ET on FX.