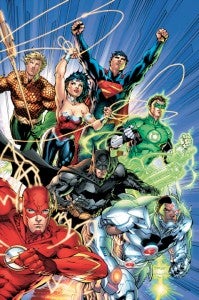 I have to admit. When I first heard about the DC relaunch, I was highly skeptical, annoyed and downright frustrated by the prospect. I couldn't believe that DC, on the surface, would do something so ridiculous, risky and downright odd, rewriting virtually years of history and continuity, making events like Infinite Crisis and the like seem meaningless. I was not happy, and I quickly thought that this whole thing would be a stunt. I started to change my opinion as more and more about the initiative came out in the news, and then today I read Flashpoint #5 and, subsequently, Justice League of America #1, the first book of the fifty-two titles to be launched, and with that my point of view drastically changed. I have to say, that if every book out of the gate is as good as Geoff Johns', Jim Lee's and Scott Williams' Justice League of America #1, then DC is certainly going to convert readers to their side and shore up readers who have been there all along.

To start, Lee's illustrations are fresh and crisp looking, and complemented nicely by Williams' inks. Characters such as Batman, Superman and Green Lantern, who are the focus of this first issue, come alive and convey depth on every page. Johns gets the story off to a rollicking start, taking us back five years ago to a time when Batman is as interchangeable to the Gotham City police as the villain he chases across the rooftops in this first issue. After a tense encounter with Green Lantern, who is in Gotham to track an extraterrestrial figure that happens to be the creature Batman was chasing across the city. Johns resets the characters in a way that establishes Green Lantern as the somewhat cocky, swaggering semi-jerk that Hal Jordan has been known to be over the years, which plays nicely against Batman, someone who embraces the anti-hero role that apparently most superheroes in this relaunch now have.

As the story continues, a familiar foe of the JLA has apparently sent the figure to earth for some sinister purpose, and now GL and Bats are off to Metropolis to find out how this new "Superman" they've heard about could factor into this otherworldly presence. Several great scenes of Lantern preening and Batman undercutting him are shown, and we are introduced to the boy who would be Cyborg as well, in a way that doesn't appear to interrupt the action of the overall story too much. Maybe a bit of a distraction, but a necessary one where team books are concerned. Everything is well-paced, with the dialogue feeling appropriately snappy and quick, as if we're observing the characters "walking and talking" in real time rather than feeling like the action stops for the sake of exposition. The issue ends with an interesting setup/showdown for issue #2 between two powerful men. A thrilling ride indeed!

I'm happy to say that I'm already looking forward to reviewing the remaining fifty-one issues, and that JLA will definitely be on my list of must reads for issue two. As a whole this flagship issue delivers on every level and sets up an intriguing and fresh new universe with enough ring of the familiar to make longtime readers, such as myself, immediately comfortable.

And so it Begins! Justice League of America #1 Review!