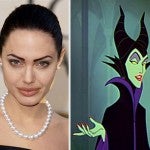 Coming in 2014 from Joe Roth, the producer of Oz the Great and Powerful, is a film that explores the roots of evil. What makes one of the most notorious movie villains of the last century--one who uses magical powers and deception to terrorize a young girl and her compantions? Find out in just less than two years, when Walt Disney Studios releases her story in a film with a one-word title meaning "harmfully malicious."

That's right--there may not be a film adaptation of Wicked--the runaway bestseller by Gregory Maguire which spawned a mega-hit Broadway show--but that doesn't mean you won't see essentially the same story splashed across the screen at your local movieplex on March 14, 2014.

Angelina Jolie stars in Maleficent, the story of how Sleeping Beauty's evil queen got to be so evil. The studio, which announced the March, 2014 release date in a release today, describes the film as follows:

Take a look at Malificent for a minute--maybe this role explains why Angelina Jolie, who once kicked the crap out of Brad Pitt for fifteen minutes in heels and only left us wondering how he lasted that long, now looks like Lara Croft's greatest challenge is finding something to eat.

Angelina Jolie Gets Wicked With Disney In 2014