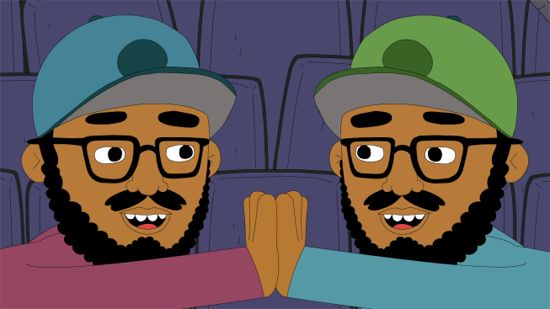 In the “DDT” episode of Lucas Bros. Moving Co., the stand-up comedy of New York-based identical twins – and television newcomers – Kenny and Keith Lucas (The Lucas Brothers) gets animated. With the help of the people of Greenpoint, the twins run a moving company called Lucas Bros. Moving Co. Their customers are often apprehensive to hire such a scrawny duo, but the brothers like to remind them that that’s why God made two of them.

In the “Ragin’ Fun” episode of Golan the Insatiable, a fearsome godlord from an alternate dimension is trapped in the small town of Oak Grove, where his only friend is a macabre little girl named Dylan (comedian Mary Mack). Together they fight the boredom of suburban life. Lucas Bros. Moving Co. voice cast includes Keith Lucas as Keef, Kenny Lucas as Kenny, and Jon Glaser as Wiktor. Guest voice cast includes Jake Roberts as Jake the Snake, Jerrod Carmichael as Tech Money, Beck Bennett as Repo Man, and Natasha Leggero as Natasha.